Harlem Pastor James David Manning — known for saying coffee at Starbucks contains the “semen of sodomites” and that LGBT individuals and those who support them should get “cancer HIV syphilis stroke madness the itch then hell” — is somehow even more hateful in his latest video, in which he refuses to call gay people “gay”: 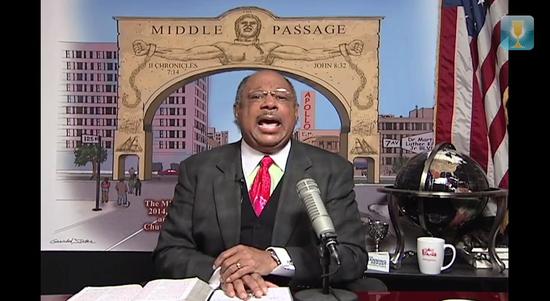 They want you to say “gay” when they’re really “faggots,” “bulldykes,” “hermaphrodites,” “lesbos,” “queers”… no, they say, “Just call us ‘gay'”… You know why?… ‘Cause even they themselves know that they are the wretched of the Earth. They are the toilet bowl… they know it! That’s why they try to change the language… Call them what they are and never refer to them as “gay.”

This guy’s church, by the way, isn’t on the American Family Association’s “Bigotry Map.” I guess they were too busy worrying about the “anti-Christian” nature of church/state separation groups to realize that guys like Manning do far more damage to the Christian brand than any of us.

February 26, 2015 Florida Naturopath Who Treated 11-Year-Old Makayla Sault Charged with Practicing Medicine Without a License
Browse Our Archives
What Are Your Thoughts?leave a comment