Atheist Jamila Bey at CPAC: “Embrace Me. Let Me Vote for GOP Candidates”

A proud black female atheist isn’t the norm for the CPAC crowd, so what did she say and what was the response?

Raw Story has the footage (the full speech is at C-SPAN): 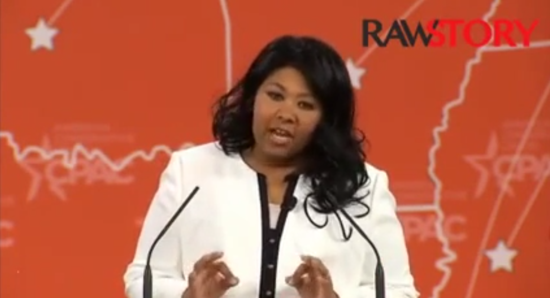 Furthermore, 90 million voters in this country are “unaffiliated,” undecided where to go, looking for home. Make no mistake: Combine that with 40 million, we’re talking about half of the [voting population]…

As conservatives, we’ve always been a family. Remember: we were the party that formed against slavery. We have preserved the Union before and we have persevered in a changing landscape. Our time to do this again is now.

Today I stand before you not just as a fellow conservative, I stand before you as a member of a growing Republican family that has inherited a new generation of potential leaders with millions of voters that we cannot afford to ignore. The law is: change or die. And to grow with our changing family, we must embrace this future to maintain our value systems, and, as Donald Rumsfeld put it best, we’ve gotta prepare for the unknown.

Over the past few years, I’ve had the opportunity to work with American Atheists. More recently, I’ve become a very proud board member of this organization. And, through this course, I’ve seen many of our youth, many of our peers, who, while different in worldview, strongly uphold the values of our conservative family. These people are an essential component of our growing electorate. We ignore them to our peril.

Well… she tried. She did everything she could to work the crowd. I’ll give her credit, though: She tried to convince them to reach out to atheists using the one tactic they might actually care about: Voting numbers. It’s to their advantage, she implied, to tone down the Christian rhetoric, embrace church/state separation, and reach out to atheists who may agree with them about things like small government. If they don’t, those voters will eventually vote against them.

The smattering of applause hardly indicated an embrace of her message.