Scranton, Pennsylvania doesn’t always come off well in the public eye. It was the hometown of the fictional Dunder Mifflin and Michael Scott; it’s where chronically-embarrassed Vice-President Joe Biden is from. It’s also the location of the aptly-named University of Scranton, whose president, Father Kevin P. Quinn (below), is so opposed to abortion that he wants to cut insurance coverage even for women whose lives are depending on that access. 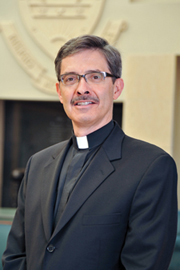 University of Scranton employee insurance plans will no longer cover abortions in cases of rape, incest or life-threatening pregnancies under a plan that the Jesuit school says is consistent with Catholic doctrine.

But the Pennsylvania university’s faculty union, which represents about 300 of its 940 full-time employees, says members must first approve any changes to its coverage.

The union negotiated away coverage for elective abortions nine years ago in return for adoption coverage, but its current contract pays for abortions in cases of rape, incest, or to save the live of the mother.

In a letter to faculty released by the university on Friday, its president, Rev. Kevin Quinn, said that even limited abortion coverage is “inconsistent with the moral teachings of the church.”

While Quinn will allow coverage for other life-saving pregnancy-related procedures, he won’t allow direct abortion coverage, even when the woman’s life is at stake. This aversion to abortion even in extraordinary cases, where the church would rather see a dead woman and fetus than just a dead fetus, is perhaps the greatest indication of how truly “pro-life” much of the so-called pro-life movement is, which is to say not at all.

Father Quinn seeks to advance the Church’s views on abortion through his university’s insurance coverage, but pro-life politicians, both Catholic and evangelical, are eyeing more than insurance policy. These anti-abortion leaders would like to enforce such views as the law of the land, whether through “personhood amendments” that would ban all abortion outright or the longer, slower erosive action we see enacted on the state level.

As the University of Scranton union is discovering, many religious abortion rights foes aren’t really interested in compromise. Abortion is to be opposed in any and every case, even when a pregnant person’s life is at stake.

That is certainly anti-abortion. But it’s not pro-life.

February 24, 2015
American Thinker Doubles Down On Its Claim That President Obama Made a "Muslim Gang Sign" to African Leaders
Next Post