American Thinker Doubles Down On Its Claim That President Obama Made a “Muslim Gang Sign” to African Leaders February 24, 2015 Terry Firma

Last August, an AP photographer took a seemingly unremarkable picture at the U.S.-African Leaders Summit in Washington. It shows President Obama getting ready for a photo op with dozens of foreign dignitaries. In the image, the prez can be seen making a fleeting hand gesture with a raised index finger.

It wasn’t until last week that we learned, from the slow-reacting but sharp-eyed F.W. Burleigh at American Thinker, what this means:

It shows Barack Hussein Obama flashing the one-finger affirmation of Islamic faith to dozens of African delegates. … The one-finger display is the distinctive Muslim gang sign: The index finger points straight up while the thumb wraps underneath and presses against the digital phalange of the middle finger.  The remaining fingers are squeezed against the palm in order to highlight the extended forefinger.  The extended finger is symbolic of the one-God concept of Muhammad and is understood by all believers to be a symbolic shahada, the Muslim affirmation of faith: There is but one God and Muhammad is his messenger. 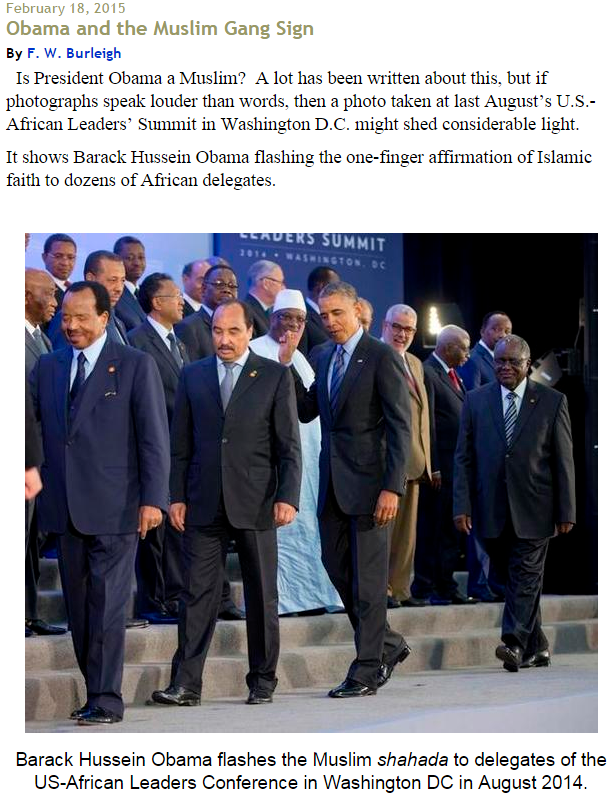 The finger in the air was a position statement brazenly stated. His entire administration has been a promotion of Islam at home and abroad, and just cataloging the evidence would fill a book. He has made this country cozy for Islam.

Well. There you clearly have it: photographic proof that the president of the United States is a man who sprays his now-barely-hidden Islamic faith hither and yon — including, we have to assume, by supporting gay rights and pushing for equality for women (both beloved Muslim precepts, as we’ve seen).

Various media outlets have attempted to gut the piece in American Finger (as I shall now admiringly call the publication), in part by pointing out that if a raised index finger is automatically a Muslim gang sign, everyone from George W. Bush to Hillary Clinton ought to be rounded up for a friendly little CIA interrogation session. 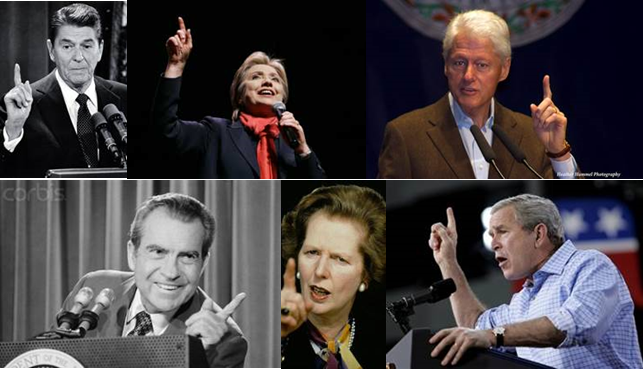 Burleigh isn’t having it, though, and yesterday he doubled down on his original claim, citing a video soundtrack of the event in which

… an off-camera voice coming from behind [Obama] cried, “Allahu Akbar.” This is a Muslim expression meaning “God is the greatest,” a cry that Muhammad, the creator of Islam, made frequent use of to incite people to violence and to praise their violent deeds. Obama’s hand gesture was in response to this cry.

Of course it was.

I have it on good authority that Burleigh’s next piece for American Finger will make the case that the president’s voice is remarkably close to the sound of the screaming man in this video.