The Southern Poverty Law Center is famous for their listing of “hate groups,” ones that “have beliefs or practices that attack or malign an entire class of people, typically for their immutable characteristics.”

Evangelical churches aren’t on the list just because they think, for example, that homosexuality is a sin. “Loving the sinner while hating the sin,” even if you don’t buy it, isn’t the same as saying there’s something psychologically wrong with gay people.

The American Family Association has long argued that the list is unfair to certain Christian groups, so they’ve now created their own version of a hate group list.

The AFA Bigotry Map identifies “groups and organizations that openly display bigotry toward the Christian faith.” 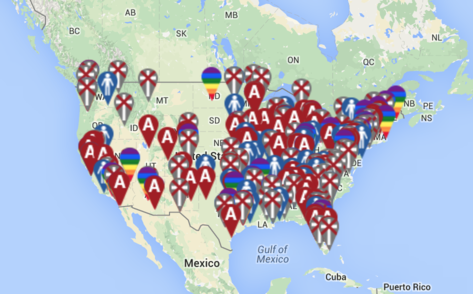 Basically every atheist and pro-LGBT-rights group out there, including local and college groups.

That’s not a joke: They’ve listed a number of groups whose members’ worst crime is disagreeing with Christianity and creating a safe space for atheists to discuss their doubts: 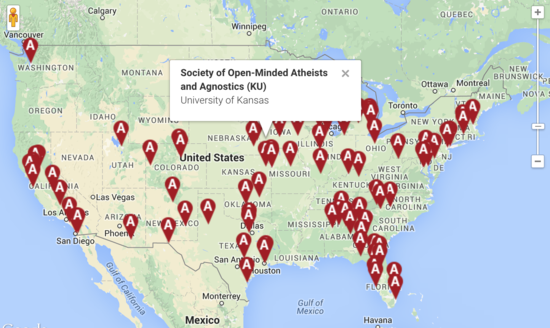 Seriously, when college atheist groups are on your list, it just evidence of how little anti-Christian bigotry there really is out there.

They even have a whole section dedicated to “Humanist” groups, which is mind-boggling if you know what that word means. 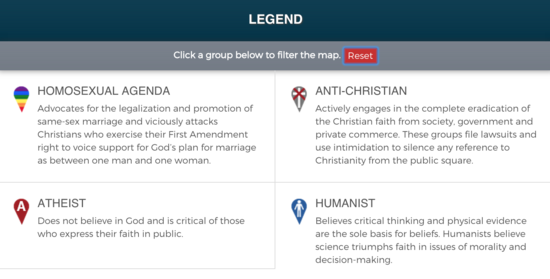 Also on the list are national organizations that support LGBT rights (like the Human Rights Campaign), fight First Amendment battles when Christians overstep their bounds (like the Freedom From Religion Foundation), and call out actual hateful groups (like the Southern Poverty Law Center, of course).

They never actually explain those crimes or why these groups deserve to be on the list.

If the AFA wants to play the game where an organization is responsible for every action taken by its members, I promise you every megachurch in the country would be guilty of harboring someone who has committed a crime or violent act. An intelligent person would tell you, though, that the blame doesn’t automatically lie with the church. Unless the pastor explicitly called for violence, you have to make a strong case for a connection between the two.

The AFA is shooting itself in the foot by trying to create their own version of the SPLC’s Hate Group list. They’re going after groups, with no rhyme or reason, that have done nothing wrong. You might as well put every synagogue and mosque on the map, too. Not a single one of the atheist/Humanist/LGBT rights groups that I can see on the map have ever supported violent acts or taking away rights from Christians. They’ve always been on the side of tolerance and inclusivity. They want non-Christian beliefs to be treated by the government the same way Christianity is treated, with no group getting special privilege.

This is how desperate right-wing groups are to show the fictional marginalization of Christians. They think criticism is the same as bigotry. They think neutrality is the enemy.

If they really cared about groups that made it tougher for all Christians out there, they would just put their own organization on the map and leave it at that.

***Update***: The Center for Inquiry has issued a press release demanding to be put on the Bigotry Map:

“Of course, the Center for Inquiry is by no means anti-Christian, and we work to combat bigotry of all kinds, be it against atheists, Christians, or any other group,” said CFI communications director Paul Fidalgo, nervously, between gulps of overly sweetened coffee. “But come on. The AFA listed Americans United for Separation of Church and State, American Atheists, and, get this, the AARP! The AARP!”

“Come on!” added Fidalgo, who looked like he needed more sleep. “We ask… no, we demand that the American Family Association recognize that we are just as much a threat to their backward vision of a theocratic, Christianized America as any of these groups — certainly more than the AARP — and add us to their list.”

February 24, 2015 Idaho Republican, Ignorant of Anatomy, Wonders if a Swallowed Camera Could Be Used in Remote Gynecological Exam
Browse Our Archives
What Are Your Thoughts?leave a comment