Was It Right for Skeptics to Try and Expose This Self-Proclaimed Psychic? February 23, 2015 Hemant Mehta

Was It Right for Skeptics to Try and Expose This Self-Proclaimed Psychic?

Earlier this month, Susan Gerbic, an activist who frequently works to expose paranormal nonsense, wrote about two operations she conceived to try and catch a “psychic” in the act.

In one case, her target was Chip Coffey, one of those guys like John Edward who claims to be able to talk to your deceased loved ones. A lot of gullible people are impressed by these readings, but there are generally two ways to pull off the trick:

In a cold reading, psychics use information you’re giving them to make further “predictions.” For example, if a woman said her son died unexpectedly at a young age, the psychic might suggest there was a tragic accident involved (because why else might a healthy young person die?).

In a hot reading, the psychics have information about you that you didn’t even know they had. For example, maybe you inadvertently told them about your problems through prayer cards (as James Randi once famously exposed), not realized the psychics were being given the details of what you had written.

That latter method was the gist of Gerbic’s operation: She bought several tickets for one of Coffey’s upcoming live shows. And then she, along with a group of friends in on the sting operation, created a fake Facebook page where they talked about who they were hoping Coffey would reach. 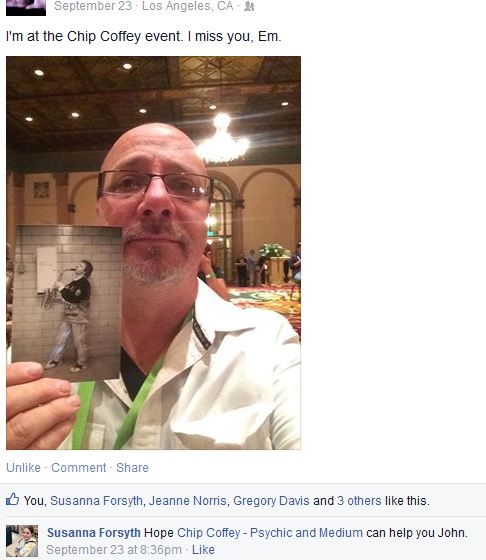 That’s a real person attending the Coffey event… but there’s no actual “Em” to be reached. But now that Coffey’s event was tagged in the post, the thinking was that his people would take notice. Then, during the live event, Coffey would say to the man: “I’m hearing from your daughter Emily…” and BOOM! Exposed!

The sting was a little more complicated than that, as you can read here, and it didn’t actually work out. There were oblique references to the fictional family members during the show, but no smoking gun that his people had checked out the fake Facebook messages/pages. For all we know, their failure to take the bait for the “hot” read was really just a solid “cold” reading.

Still, I thought it was a very clever idea. More power to Gerbic and her crew for putting together an experiment to catch these people in the act.

Ami Bruni didn’t have the same reaction. The former investigator on SyFy’s Ghost Hunters was appalled that anyone would try to expose these psychics in this way:

Weird…I don’t see people who believe in paranormal and psychic phenomena accosting “skeptics” at their conventions and gatherings — or posting constant blogs and forums about how skepticism is terrible. Strangely enough, we really don’t care what their belief system is — because it is their right. And personally, I don’t care or have to justify what I believe to someone else.

So, why do they feel the need to constantly bash what we do? Arrange “guerrilla stings” on psychics and paranormal conventions? I mean — puh-lease, you must have something better to do.

Truly — there’s a whole lot of bad in this world. And if your “cause” is to take on people whose thoughts on life and existence are different from yours, (but causing YOU no harm), I think it’s time you take a little look at yourself.

That’s an awful argument, of course. Bullshit should always be exposed, especially when it involves people throwing away their hard-earned money and being told the lie that their dead relatives are trying to contact them. You would think a paranormal investigator would be in favor of experiments that could reveal frauds.

She later clarified her comments:

Critical thinking IS severely lacking in this field and it makes us easy targets. Which brings me back to my original post. Again, I have nothing against skeptics in general — but I do have everything against the methods some are employing and the fact they are attacking people who I love and trust intensely. Furthermore, I am a free thinker and everyone should have that right. It is not anyone else’s job to make those decisions for you. Their argument is they’re saving you from yourself. I say — stop worrying about people who don’t need your advice or sympathy. Live and let live. And trust that people are grown up enough to make their own decisions.

As someone who uses rational inquiry to investigate paranormal claims and the strange experiences that people report having I’d stand with believers any day rather than associate myself with “skeptic activists” who don’t seem able to see past their own noses. It isn’t always about being right and it isn’t always about point scoring. There’s a whole human side (dare I say humanist side?) to being involved in paranormal research that so many people miss and that’ss pretty tragic, don’t you think?

It’s not about point-scoring, though. It’s about giving people more information about the bullshit they’re being exposed to. To not care about that — or to suggest the skeptics are in the wrong here by trying to shatter false hopes — seems like an abdication of any paranormal researcher’s responsibilities.

I repeat: People going to these shows may be grown up, but if they’re not fully informed, then they’re not really “making their own decisions.” Sure, I could invest my own money in some tiny company, but if someone had evidence that the owners were shady people, I’d want to know about it.

No one’s trying to ban these psychics or stop these shows. But we do want to enlarge the fine print that this is purely for “entertainment purposes” and that it’s all just a magic trick.

There’s a reason that many people who understand the odds of winning the lottery don’t play it. They know they have no chance of winning and that money spent on a ticket would be wasted. If you know the odds and want to play just for fun (like you might in a casino), go for it.

But I don’t understanding the thinking that trying to expose people like Coffey — and alerting unsuspecting people to what’s actually behind the curtain — is a bad idea. It makes no sense.

I asked Gerbic what she thought of the criticism and she told me (via email, which I’ve slightly edited) that there was “real harm in not thinking critically”:

I’m sorry that [Bruni] felt that I was being mean to her friend Chip Coffey (he has responded in the thread of her FB thread saying [“I absolutely LOVE you!“]) and she also posted a few days ago that she was really looking forward to going to his show.

Psychics like Chip Coffey are making a claim. The burden of proof is on them, not us to disprove them. They are not lining up for testing for some reason, but still continue to claim they are communicating with the dead. So they are fair game in my opinion.

Coffey has now written a blog stating that he knew all along we were fakes and skeptics. That he played along. He even joked with us when we took photos with him at the end of the show. Readers can read into all this whatever they want to.

Just like a plumber or electrician who is hired to do a job needs to have some evidence that they have passed tests, some kind of certification, I think a psychic should have to offer some reasonable evidence as well. This is a consumer protection after all. Anecdotes are not evidence.

February 23, 2015
No Women Allowed at This Church Event... Unless They're Serving the Men
Next Post