Atheists and Believers Respond to Westboro Baptist Church with Unity, Positivism, and Resolve

On their way to Hollywood to peddle their drug of addiction, hate, outside the Academy Awards Sunday night, half a dozen members of the Westboro Baptist Church paid a morning visit to my home town 35 miles north of Los Angeles. They targeted five churches in a series of brief picket protests for the sin of having female pastors and other doctrinal practices that they abhor. Armed with their typically vile signs and antagonistic rhetoric, they timed their demonstrations to be seen by the parishioners as they arrived for or left Sunday services.

A few of us from the Santa Clarita Atheists and Freethinkers (SCAF) joined 200 to 300 members of the community to counter-demonstrate at each of the churches, despite the drizzle of much-needed rain. Groups from other churches and faith organizations, many students from Gay-Straight Alliance clubs at high schools and the community college, military veterans, and plenty of families and individuals turned out to overwhelm the little sidewalk bigot squad with a flood of harmony, acceptance, and love.

Here’s a small sampling of the nasty and rather goofy messages of the WBC:

And below is a small sampling of the positive messages, theist and atheist side-by-side. The hard-to-read posters say,

“I’d rather have a mind opened by wonder than one closed by belief.” — Gary Spence

“Men never do evil so completely and cheerfully as when they do it from religious conviction.” — Blaise Pascal

Properly read, the Bible is the most potent force for atheism ever conceived.” — Isaac Asimov 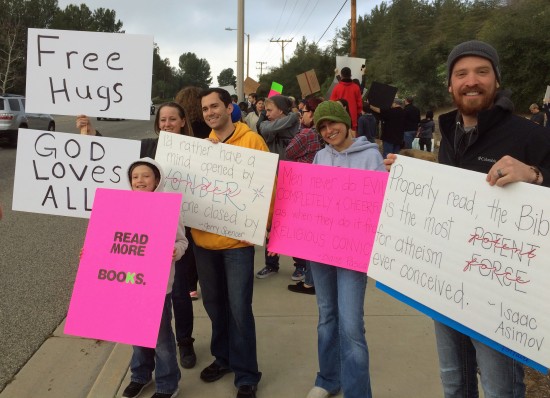 We split into two main groups to leapfrog to each of the five locations, arriving before the WBC members got there. We lined the sidewalk for a hundred yards on either side of them, so visually and audibly their dark message was obscured. The local deputy sheriffs were there to keep the protesters and counter-protesters a safe distance apart, but the crowd was in such a good mood that there was no hint of danger. The parishioners arriving in cars gratefully returned our welcoming waves, and drivers passing by honked or cheered in approval.

Good spirits were not dampened by the rain. 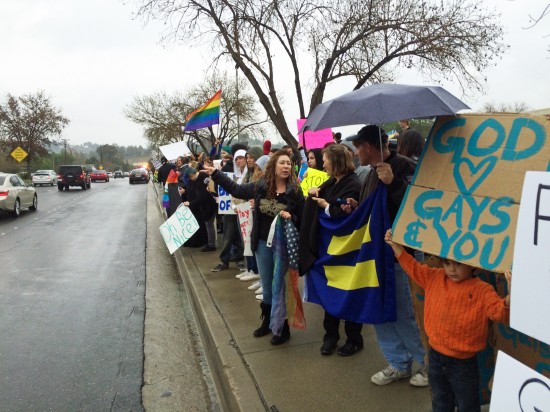 Several people were curious about my SCAF t-shirt and expressed interest in attending our meetings. I even met a Satanist group I hadn’t known was here, and I congratulated their east coast compatriots for recently being more effective at stopping school proselytizing than atheist groups have been. We shared a laugh about that. Overall, it was the warmest and brightest cold, dark, wet winter day I’ve enjoyed in many years. My town has a reputation for being conservative, but I’m proud of how even so tiny a group of haters spurred so many of us, both religious and irreligious, to literally stand together against their loathsome influence. 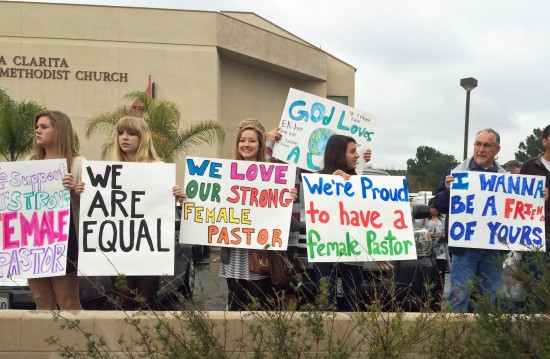 Veterans supporting us with flags of their service branches: 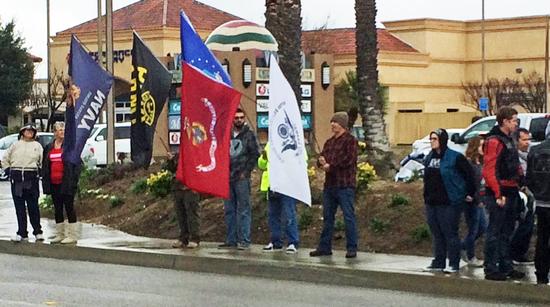 February 22, 2015
Rapper Common May Have Thanked God After Winning an Oscar, but John Legend Has Religious Doubts
Next Post

February 23, 2015 Atheist Billboards Go Up in Puerto Rico to Promote Upcoming Conference
Browse Our Archives
What Are Your Thoughts?leave a comment