A Glimpse Into the Lives of Muslims Who Left the Faith February 23, 2015 Hemant Mehta

A Glimpse Into the Lives of Muslims Who Left the Faith

Voice of America’s Jerome Socolovsky recently attended a private party in Washington, D.C. hosted by Ex-Muslims of North America and got a glimpse into the lives of some courageous apostates: 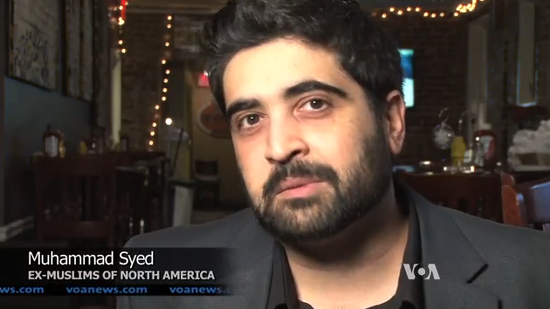 The group invited VOA to talk to some of its members, under an agreement to protect the identities of those who fear retaliation. [Muhammad] Syed said the Internet has made it easier for former Muslims to find each other and encourages them to come out of the closet.

Sarah Haidar, who was born in Pakistan, said that growing up in Texas, she never imagined someone could want to leave Islam.

“I thought it was sort of a one-way street. You just found your way into Islam and you stayed there,” she said, adding that people who are pulled in the other direction are afraid to talk about it.

“Many Muslims take it as a personal insult when you step out and step away from their religion,” she said. “And I understand why that is, but I think it creates a situation where people are afraid to speak their minds, where dissent is not really respected on any level.”

I thought the imam interviewed in the piece was fantastic. He essentially laughed off the notion that apostasy should be punished by death, asking those who make that argument: “What kind of religion is this?”

If only all other Muslims leaders would follow his lead and continue asking the same question.

One other note: You can see in the video that some of the faces were hidden due to safety concerns. Muhammad Syed told me that one of the people whose face was shown clearly “received credible death threats, directed at both himself and his family, within 24 hours of the video being released.”

February 23, 2015 Friendly Atheist Podcast Episode 43: Ross Blocher, Co-host of Oh No, Ross and Carrie!
Browse Our Archives
What Are Your Thoughts?leave a comment