Brandan Roberston was excited when he signed a book deal with Nori Media Group last year, while he was still a student at Chicago’s conservative Moody Bible Institute. Nori represents a range of religious authors, from Michael Brown on the right to Benjamin Corey on the left. The publisher is home to popular Christian authors including T.D. Jakes, an abstinence-promoting megachurch pastor, and Bill Johnson, a fifth-generation pastor of a charismatic church in California who happens to be a faith-healing aficionado. The company’s goal is “to deliver Spirit-filled, Biblically-sound resources that help bring Christians into their God ordained destiny.”

Robertson seemed like a shoe-in at Nori. He stood to bring the publisher his own audience, which he’d been building at his Patheos blog, Revangelical. After graduation, he managed to raise his profile considerably:

Robertson, now 22, became the national spokesperson for Evangelicals for Marriage Equality, an initiative started by millennials to help evangelicals support civil gay marriages. He spoke at a Reformation Project conference, an effort by fellow evangelical activist Matthew Vines to raise up affirming evangelicals in every evangelical church in the country, last fall. … Time featured Robertson in January in a magazine story, “Inside the Evangelical Fight Over Gay Marriage.” 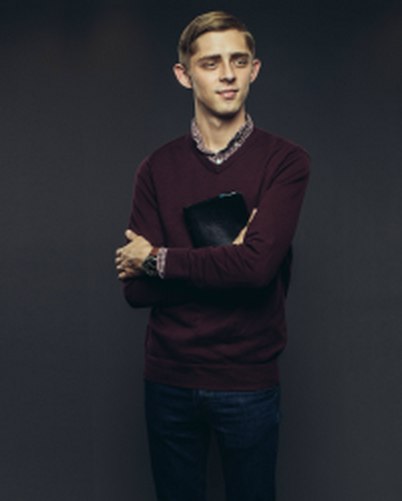 Nori’s editors and marketers should have gotten excited, and all indications were in fact positive. Roberston received two-thumbs-up feedback from the publisher along the way.

But only a few hours after he submitted the manuscript of his book, Nomad: Not-So-Religious Thoughts On Faith, Doubt, and the Journey In Between, Nori expressed misgivings.

“I’m sure it feels amazing to have the manuscript finished!” [Destiny Image’s Mykela] Krieg wrote [Destiny Image is a Nori imprint]. Then she continued: “Since you’ve been receiving more media attention over the past few months, we’ve had some questions/concerns arise from our buyers, and our executive team has asked that I connect with you about your stance on a few issues that may continue to come into question.” …

Krieg explained Destiny’s concern that Christian retailers wouldn’t buy the book because of Robertson’s public advocacy for gay and lesbian inclusion in Christian communities. Krieg then emailed Robertson Destiny’s statement on homosexuality. It was the first time, Robertson says, that they asked him if he could agree with the statement. It reads: “Destiny Image accepts the Holy Scriptures as the infallible word of God and answers all questions concerning life and godliness. We do not condone, encourage, or accept the homosexual lifestyle. Destiny Image renounces this lifestyle as ungodly and completely contrary to the Kingdom of God.”

Obviously, Robertson responded that he couldn’t sign that, nor publicly agree with it. Nine days later, Nori officially dropped him.

The word “gay” appears in [the] Nomad manuscript only one time, in a chapter titled “Grey,” that begins with a quote from the Nobel-Literature-Prize-winning André Gide, “The color of truth is grey.” Robertson writes: “One high school biology class is all that it takes to begin asking some serious questions about the book of Genesis and the origins of humanity. One conversation with a close friend who is struggling to be gay and Christian is all that it takes to begin wondering if the interpretation of Leviticus we heard in Sunday school is actually applicable in today’s context.”

My friend and fellow Patheos blogger Ben Corey, a progressive, pro-gay-rights Christian, also has a book deal at Nori. When he needed new author photos last year, I did him a well-deserved solid and created some new portraits of him (when I’m not writing, I’m a professional photographer). In the fall, Nori sent me a check for $250 to be allowed to use a few of those images.

I cashed it, but now that it’s clear what kind of company Nori is, I’ve decided I don’t want the money. I could sure use it, as my wife and I are on the verge of adopting another child, a four-year-old who’s been in an orphanage her whole life — but I’d feel better about giving this now-tainted sum to some pro-equality initiative. Tell me to which organization I should make a donation, and if I like your suggestion, I’ll take care of it.

Provided Robertson’s book is any good, I hope he’ll find an enthusiastic publisher for it. Maybe the publicity around the Nori kerfuffle will help get the word out.

As to what the publishing future holds for Ben Corey, I’m not sure. I asked him yesterday if he’ll continue his (d)alliance with Nori Media Group, and he replied that he’ll release a statement soon. Surely he’ll understand that as long as he stays with the hostile-to-gays publisher, I’ll have no choice but to call him Ben Nori. Heh.

February 22, 2015
Hoax Alert: Father O'Neal, Who Has Met God and Thinks She's a Woman, Is Made Up (Just Like God Herself)
Next Post

February 22, 2015 In 1830, One Pious American Railed Against Trains and Their Breakneck 20-MPH Speeds
Browse Our Archives
What Are Your Thoughts?leave a comment