In December, Bells Elementary School in Tennessee held a concert that not only opened with Christian prayers, but included songs about Jesus. While Christian music is allowed in holiday concerts, it can’t be so predominant that a reasonable person would suspect the school is promoting Christianity. Whatever the boundary line is, the school clearly crossed it.

And the reason we know it? 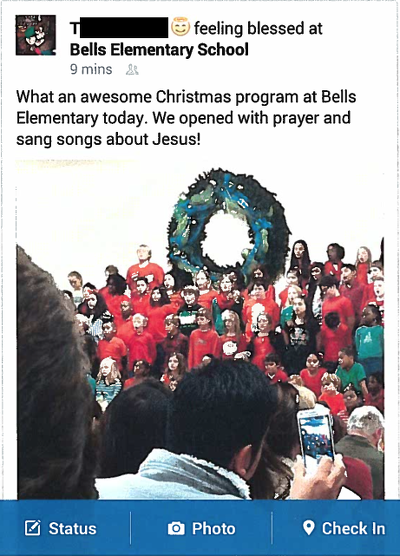 The Freedom From Religion Foundation sent a letter to the district explaining the problem:

Given the young age of the schoolchildren, an elementary school holiday program including a religious ritual and religious content is particularly alarming… Elementary-age students will understand any sort of religious practice to be school-endorsed.

Bells Elementary must remove the prayer and religious music from future holiday programs. These prohibitions — particularly regarding prayer — extend to all school-sponsored events. In addition, we urge the school to remind all teaching staff of their constitutional obligation to remain neutral toward religion, which includes refraining from praying with students or teaching religious music.

There’s no threat of a lawsuit; FFRF is simply asking the school to make a promise to stay within the boundaries of the law in the future. So far, there’s no response from the district.

February 21, 2015
"I Do Not See Him As a Terrorist": Five Hundred Mourners Attend Funeral of Copenhagen Gunman
Next Post

February 21, 2015 Help an Atheist Charity Get Some Sweet, Sweet Reddit Cash
Browse Our Archives
What Are Your Thoughts?leave a comment