South Dakota Republican State Rep. Isaac Latterell (below) has an important message for the people of his state. Dilation and evacuation abortions are basically “beheading unborn children” — and since you don’t like when ISIS beheads other people, you should be outraged that Planned Parenthood offers abortion. 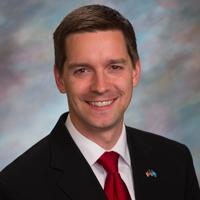 To that end, he has put forth House Bill 1230, the Preborn Infant Beheading Ban of 2015, which would outlaw the procedures and jail violators.

No licensed physician may knowingly behead a living unborn child with the intent of endangering the life or health of the child. A violation of this section is a Class 1 felony.

I’m curious how abortion doctors would go about implementing these fetal, in utero beheadings; I’m even more curious as to how a person could “knowingly behead a living unborn child” without the intent of endangering its life or health. The ban does make an exception for when the pregnant woman’s life is in danger, but this exception is only for accidental or unintentional harm:

The provisions of this Act do not apply to any medical treatment for a life-threatening condition provided to the mother by a physician licensed to practice medicine in the state which results in the accidental or unintentional injury or death of the unborn child.

“Knowingly behead[ing]” a fetus couldn’t possibly result in “accidental or unintentional” harm to the fetus, since you’d be deliberately cutting its head off… so I’m at a loss as to who Latterell has in mind here, and in what scenario deliberate fetal beheadings could accidentally harm the fetus.

I’m not sure that he even knows, but he does at least seem quite taken with his ISIS comparison. (Why worry about making sense, when you can just accuse people who disagree of being terrorists and murderers?)

Because performing a rare but legal and often necessary medical procedure is totally like — and worse than — the actions of a terrorist organization that “knowingly” kidnaps, decapitates and burns sentient human beings.

For some reason, though, Planned Parenthood isn’t keen on the comparison. Huffington Post reports,

Those who support the ban say these [dilation and evacuation] procedures can separate the skull from the spine. But [Planned Parenthood spokeswoman Jennifer] Aulwes told KSFY that the bill is both medically inaccurate and inflammatory and that Planned Parenthood’s only clinic in the state doesn’t even perform abortions after 14 weeks.

Latterell claims the procedure has been performed in South Dakota seven times since 2008 and accused Planned Parenthood of lying about it.

And, in case you’re curious, Latterell’s abortion worries don’t just involve fetus-decapitating-physicians and Planned Parenthood-spun-webs-of-intrigue. His concerns range from reasons for abortion to payment for abortions to reporting of abortion stats. Because, while Latterell might not be a fan of terrorism and some medical procedures (which are worse than terrorism!), he’s apparently comfortable with the sort of religious fundamentalism that tries to exercise absolute control over intimate details of other people’s lives.

February 20, 2015
Neurologist and Author Oliver Sacks Is Slowly Dying. True To Himself, He Wrote A Beautiful Piece About It
Next Post