North Dakota GOP Reacts to Muslim Invocation: We Shouldn’t Be Forced to “Listen to a Prayer [We] Don’t Agree With” February 20, 2015 Hemant Mehta

North Dakota GOP Reacts to Muslim Invocation: We Shouldn’t Be Forced to “Listen to a Prayer [We] Don’t Agree With”

When we talk about invocations at government meetings, we know the reality of the situation is that they are almost all Christian prayers… with an occasional non-Christian thrown in there to keep things legal.

But the North Dakota District 24 Republicans found reason to freak out when Dr. Nadim Koleilat, a local Muslim leader, was scheduled to deliver the House invocation this past Wednesday. Ash Wednesday. So not only was he supposed to deliver his prayer on a Christian holiday, he was a Muslim delivering what we all know is supposed to be a Christian prayer. 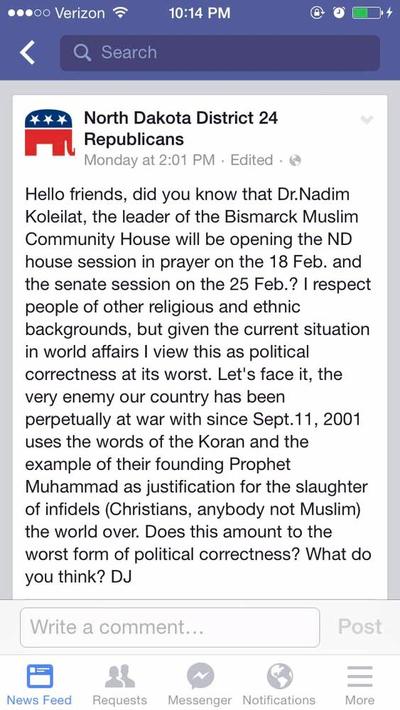 Hello friends, did you know that Dr.Nadim Koleilat, the leader of the Bismarck Muslim Community House will be opening the ND house session in prayer on the 18 Feb. and the senate session on the 25 Feb.? I respect people of other religious and ethnic backgrounds, but given the current situation in world affairs I view this as political correctness at its worst. Let’s face it, the very enemy our country has been perpetually at war with since Sept.11, 2001 uses the words of the Koran and the example of their founding Prophet Muhammad as justification for the slaughter of infidels (Christians, anybody not Muslim) the world over. Does this amount to the worst form of political correctness? What do you think? DJ

In short, I respect other people, but only Christian prayers are allowed in the House… All Muslims are automatically extremists… and inviting a Muslim to deliver an invocation is somehow political correctness gone awry.

He quickly deleted the post on Facebook, but not before elected Republicans had their chance to weigh in and make the situation even worse:

District 24 Rep. Dwight Kiefert, R-Valley City, was among those who objected to having a non-Christian deliver the prayer on Ash Wednesday.

“I mean, you had representatives on the floor with ash on their foreheads commemorating the day. And so then you’re going to force them to listen to a prayer that they don’t agree with? It wasn’t very well thought out, I don’t think,” he said. “If it would have been a different day, maybe it would have been better.”

As soon as Christians abstain from delivering an invocation during the month of Ramadan, I’ll take that first idea more seriously.

And don’t you love that other line? “You’re going to force them to listen to a prayer that they don’t agree with”?

That’s what it’s like for the rest of us all the time!

The only difference is that Christians, in this case, finally got a taste of their own medicine.

Even worse: The pressure worked. Koleilat didn’t give the House invocation on Wednesday. He did, however, deliver it to the Senate, and you can read his theistically-inclusive prayer right here.

(Thanks to Chen for the link)