Jesus Has Been Weeping Bitter Tears Since the Election of an Atheist Prime Minister in Greece February 20, 2015 Terry Firma

A Jesus-on-the-cross icon in Greece seems to have been perspiring an as-yet-unidentified liquid for the last three weeks, something the country’s faithful are taking as a sign that God is distraught about the leftist government of Alexis Tsipras, the new prime minister, who is an atheist.

A religious icon of Jesus Christ in a small village in Greece has been “weeping” ever since the anti-austerity party Syriza won the Greek elections at the end of January, witnesses say.

According to Corinth TV and the Athens-Macedonian News Agency, the icon, which dates from early last century and is housed in the church of St. Nicholas in the village of Asprokampos, Corinthia, has been secreting an oily liquid since the left-wing party leader, Alexis Tsipras, stormed to power on January 26th. 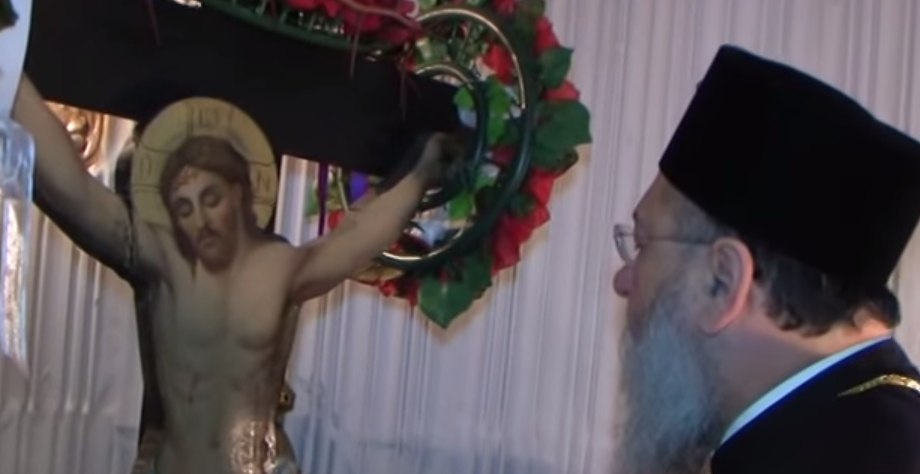 On Monday, the Bishop of Corinth visited the church and crowds have been flocking there all week, local media reports. Some villagers have taken to guarding the church to ensure that nobody removes the icon or tries to take a sample of the ‘tears.’ A senior church official has expressed his desire for scientists and Greek Orthodox superiors to investigate the occurrence.

Yiannis Baboulias, a Greek investigative journalist, has seen it all before. He says that

… the aim of stories about ‘weeping’ religious icons [is] usually a way for the Greek Orthodox Church to attract more attention and followers. “What is really happening,” according to Baboulias, “is simply that the paint on the icon is starting to leak due to environmental changes.”

Greece is not the only European country with an atheist in charge; France and Croatia also have non-religious leaders at the highest level. Google did not turn up any recent instances of French or Croation religious statues weeping blood, oil, milk, sewage, or other liquids.

February 20, 2015
When It Comes to Academy Award Acceptance Speeches, a Lot of People Get Thanked More Than God
Next Post