You know, it’s bad enough when Christian bakery owners won’t make a cake for a gay wedding, but I didn’t realize some Christian doctors were also incapable of caring for children of same-sex couples: 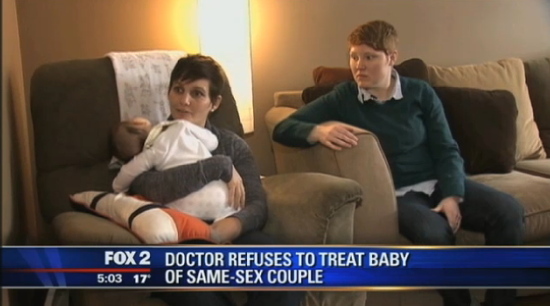 Last September when the expectant mothers [Krista and Jami Contreras] first met Dr. Vesna Roi at Eastlake Pediatrics in Roseville [Michigan]. She was recommended by their midwife.

The Contrerasas were told to make an appointment with Roi once Bay arrived. The baby was born at home and when she was six days old — they went in.

But instead of seeing Dr. Roi, another doctor greeted them.

“The first thing Dr. Karam said was ‘I’ll be your doctor, I’ll be seeing you today because Dr. Roi decided this morning that she prayed on it and she won’t be able to care for Bay,” Jami said.

“Dr. Karam told us she didn’t even come to the office that morning because she didn’t want to see us.”

Four months later, after word of the rejection spread online, the couple received a letter from Dr. Roi. She apologized for not meeting them in person that day, but didn’t apologize for not treating their child, writing, “I felt that i would not be able to develop the personal patient-doctor relationships that I normally do with my patients.”

Because when you talk to gay people, you have to speak a different language?

As it stands, in Michigan, there are no anti-discrimination laws protecting LGBT individuals. So Dr. Roi can continue dismissing children whose parents’ sexual orientation she disapproves of…

Makes you wonder what she learned in school: Do no harm… unless a baby has lesbian parents, in which case it’ll just have to fend for itself.

February 19, 2015
You Can Help Foundation Beyond Belief in a Big Way with Just a Couple of Clicks
Next Post