A 10-Hour Walk Through Paris Wearing a Yarmulke Yields… Not Very Much in the Way of Overt Discrimination, Actually February 19, 2015 Terry Firma

A 10-Hour Walk Through Paris Wearing a Yarmulke Yields… Not Very Much in the Way of Overt Discrimination, Actually

Was I watching the same viral video as the writer for the New Zealand Herald did?

Zvika Klein, a reporter for Jewish news outlet NRG, silently walked in the city for ten hours wearing a kippah — also known as a yarmulke — on his head and a tzitzit (knotted ritual tassels). … He spent a day in Paris with a bodyguard while photographer Dov Belhassen documented the day using a GoPro camera hidden in his backpack. …

And the shocking hidden camera footage shows antisemitism is rife in the French capital as he is seen harassed and intimidated.

I don’t doubt that anti-Semitism, especially by Muslims, is very real, and it shocks the conscience. It took me no time at all to remember the murder of a rabbi and three young schoolchildren in Toulouse three years ago; and of course there was last month’s terrorist bloodbath that claimed the lives of four Jews at a kosher Paris deli. Last July, pro-Palestine demonstrators in Paris repeatedly attacked Jewish shops and a synagogue, while chanting “Gas the Jews.” Hateful graffiti is frequently spray-painted on Jewish property in France, from cars to gravesites.

But the negative moments that Klein experiences during his 10-hour walk, which he distilled into a 90-second YouTube summary, are by themselves hardly enough to make the case that anti-Semitism is “rife” in France. Most of the interactions are ambiguous; the perceived insults opaque and even a little mystifying; and it’s rarely even clear whether the sentence snippets caught by the microphone are directed at Klein, or happen to be part of some street-tough dialog between bystanders. 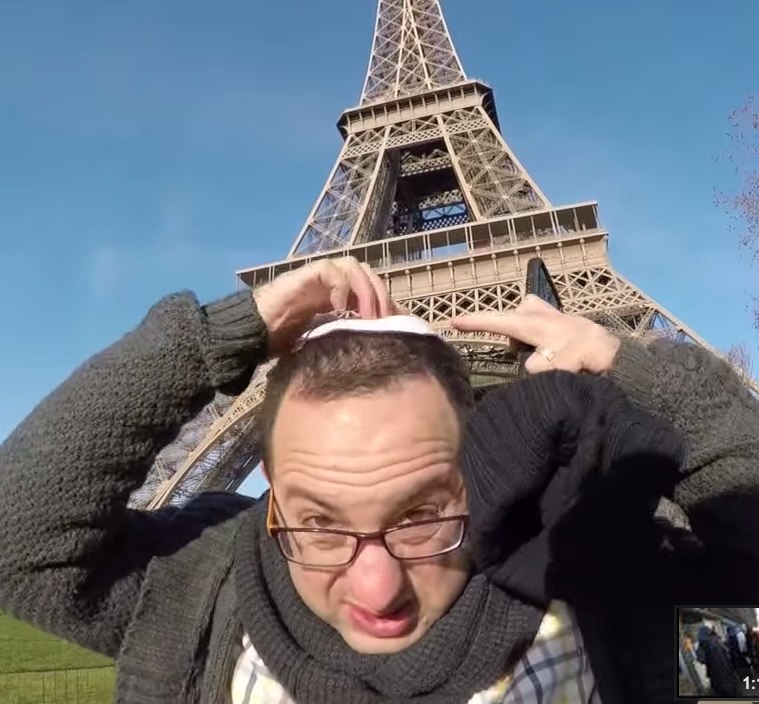 I also kept wondering what would happen if you flipped roles. If the video-recorded walk was instead undertaken by a man in Muslim garb traipsing all over Paris, what would we see?

What if the marathon walker wore no identifying marks at all — would 10 hours of traversing various neighborhoods, including rough ones, yield hostile remarks and an act or two of (possibly intimidating) street machismo? I think yes. No different than L.A. or Rio or Johannesburg.

That’s not to minimize the experience of French Jews, who have good reason to feel embattled much of the time.

But let’s not forget that it’s often no picnic for Muslims either: within six days of the Charlie Hebdo massacre,

There [had] been 21 reports of shootings and grenade throwing at Islamic buildings, as well as 33 cases of threats and insults, said Abdallah Zekri, president of the Collective Against Islamophobia in France (CCIF).

Point of order: the “grenades” were blank shells. I wish people like Zekri wouldn’t try to make it sound worse than it already is.

Anyway: Tribalism — very much including the religious kind — is the hardiest stuff that humans know how to build. People are, on the whole, pretty bad at overcoming it, if they can even bring themselves to try.

Maybe Klein has some work to do in that regard. In the article that accompanies his video, he writes,

Welcome to Paris 2015… where keffiyeh-wearing men and veiled women speak Arabic on every street corner.

We’ll have to take his word for it, as keffiyeh-wearing men appear to be absent from his video.

So are the worst examples of anti-Jewish bigotry that he reports in his article. For instance:

Walking into a public housing neighborhood, we came across a little boy and his hijab-clad mother, who were clearly shocked to see us. “What is he doing here Mommy? Doesn’t he know he will be killed?” the boy asked.

If there’s footage of that encounter, I’ve been unable to find it.

But more to the point, what if there were “keffiyeh-wearing men” all over Paris? Turn that statement of Klein’s around, and you get a Muslim grumbling with the exact same latent hostility and horror that, in Paris, there are “yarmulke-wearing men” everywhere you look. Klein would no doubt consider the latter remark beyond the pale; so why isn’t isn’t the former?

He does ultimately demonstrate that in-group/out-group bias is alive and well — but maybe not quite in the way he intended.

February 19, 2015
GOP Congressman: The Problem with America's Fight Against ISIS is That They Believe in God More Strongly Than We Do
Next Post