These Are the Most and Least Religious States in the Country February 18, 2015 Hemant Mehta

These Are the Most and Least Religious States in the Country

Gallup has just released its annual list of the most and least religious states in the country (based on church attendance) and there’s no real change from the past. 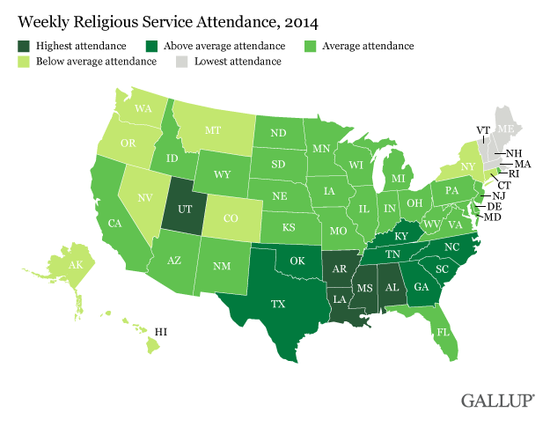 There is no definitive answer as to why residents in a state like Mississippi are so likely to be in church on Sundays, while residents in a state like Vermont are so unlikely. Some of the differences reflect the types of people who choose to live in these states, and some reflect the types of religion that are predominant in a given state. A good deal is related to the history, culture and norms that are found in a particular state. Whatever the underlying reasons, it is clear that the cultural practice of attendance at religious services is much more dominant in specific states and regions of the U.S. than it is in others.

Incidentally, Vermont is the least religious state by a landslide. 71% of residents seldom or never attend church, while only 17% go weekly.

Everyone one else has a lot of catching up to do.

February 18, 2015
Sam Harris on the Chapel Hill Murders and Militant Atheism... and Why He Now Fears For His Safety
Next Post