Have you ever really considered the spiritual perils and pitfalls of posting ultrasound photos on Facebook? That was a question posed to Pat Robertson on The 700 Club Monday, and, rarely one to pass up an opportunity to sound crazy, he answered by invoking witches, covens, and curses.

My daughter is pregnant with her first child (my first grandchild) and obviously thee is a lot of rejoicing and excitement. Young parents now regularly post fetal ultrasound photos as their Facebook photo. From a spiritual point of view is there any harm in doing this? Please give me your thoughts on this. 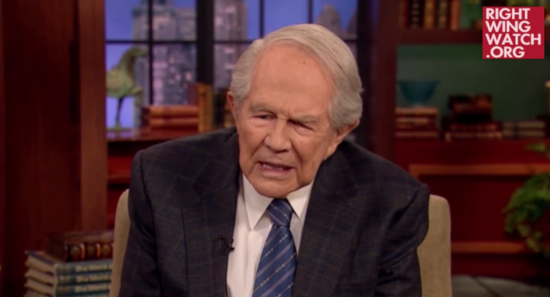 Instead of taking a moment to help encourage a little less spiritual paranoia in Cynthia, Robertson added his own medieval fears to her concern in his answer. He responded:

I don’t think there’s any harm in it. But I tell you, there are demons and there are evil people in the world, and you post a picture like that and some cultist gets hold of it or a coven and they begin muttering curses against an unborn child. I just don’t think that — this business of, I mean, posting the most intimate parts of your body on Facebook? I just can’t see it. To me it’s abhorrent. But it isn’t necessarily un-Biblical, just abhorrent.

I admit, the inadvertent pro-choice language (“your body”) made me chuckle. But I’m curious about the implications of Robertson’s troubling warning.

Is there something particularly vulnerable to coven-magic and occultist curses in the fetus, or does it extend to children who have, say, not yet had a chance to be converted by their parents? Would it be abhorrent for parents to post photos of their newborn or toddlers, or are demons not interested in corrupting infants? And what about pets? I don’t have kids, but I do have pets; and sometimes I post photos of them to Facebook. As my cats in particular are evil enough without occultist curses, this has me worried… (Or have they already been cursed? That would explain a lot. Oh my!)

And what about posting photos of food and beverages to Facebook? Witches have been known to sour beer. Are there covens out there waiting to ruin a person’s favorite brew?

Please, Mr. Robertson, address these spiritual perils soon. Inquiring minds want to know just what sort of Facebook use is safe and what exposes us to cultist interference in our daily lives.

February 18, 2015
Clark County (Washington) Officials Find an Underhanded Way to Pass an Unpopular "In God We Trust" Proposal
Next Post