“Italy Fears ISIS Invasion From Lybia,” trumpets a headline in the Daily Beast. The prospect of such a thing initially seems silly and far-fetched, but author Barbie Latza Nadeau, who also contributes to NPR and Newsweek, explains why Italians are worried.

[T]here is no question that there is a palpable tension in Italy over the ISIS threat — Libya is just 109 miles away from the island of Lampedusa and 300 miles from Sicily — made worse by a 64 percent increase in illegal migrant arrivals by sea since last year.  In all of 2014, more than 170,000 people arrived from Libya and Turkey, the highest number ever recorded. Last weekend, as the embassy staff [from the recently-shuttered Italian embassy in Tripoli] made their way to Italy on a mercantile ship, 2,164 migrants left the same Libyan shores en route to Sicily.

Nadeau says the young, untested, and teetering Italian government is taking the ISIS threat seriously. Last week, on Twitter, ISIS members posted links to a video of 21 Coptic Christians being beheaded. That video was titled “A Message Signed With Blood To The Nation Of The Cross.” The title of another recent ISIS production was “We are south of Rome.”

Italy has only 5,000 troops available that are even close to deployable, according to the defense ministry. … [T]he military budget was cut by 40 percent two years ago, which has kept the acquisition of 90 F-35 fighter jets hanging in the balance and left the country combat-challenged to lead any mission — especially one against an enemy like the Islamic State. … Anti-immigration politicians have argued for months that it would take little for jihadi fighters to infiltrate a migrant boat and effectively end up taxied into Italy by rescue ships and the Italian navy. 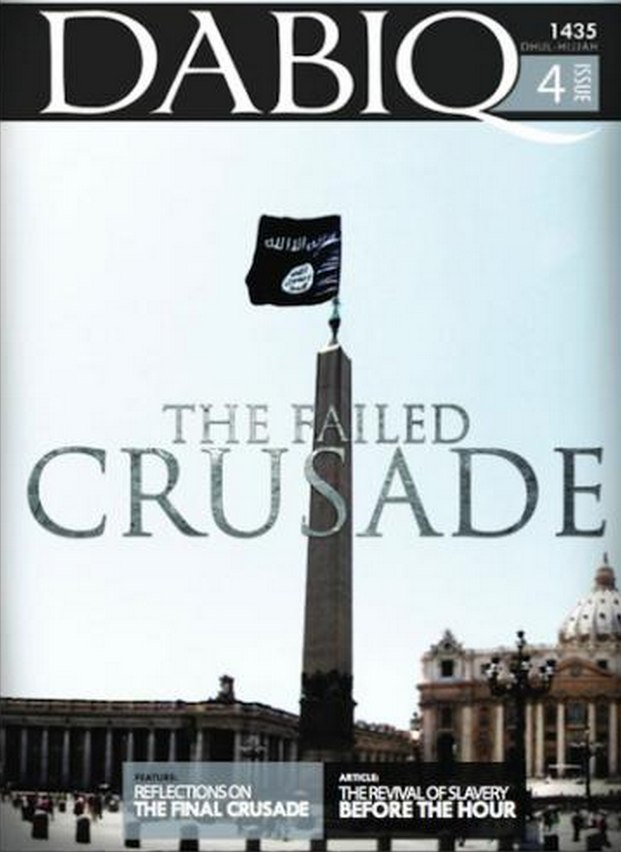 … who usually melt in with the migrants, are armed and dangerous. Last weekend, smugglers wielding Kalashnikovs fought the Italian coast guard rescue boat to wrestle back a smuggler ship after the human cargo had been rescued and the boat seized. They hauled the boat back towards Libya, presumably to fill it up again. The Office of Migration in Rome says there could be as many as half a million people in camps waiting to come to Italy and the unrest will push them out faster.

The fear of ISIS goes hand in hand with an aversion to an unfettered stream of new immigrants. That might make those who oppose immigration seem like Chicken Littles or even racists, but it’s no secret that ISIS really has had its eye on Italy for a while now.

In October, the group dedicated the cover of its Dabiq magazine to a story called “Reflections on the Final Crusade” [cover photo, above] about how they will conquer Rome, complete with a photo of a black jihadist flag flying over St. Peter’s Square. “We will conquer your Rome, break your crosses, and enslave your women, by the permission of Allah, the Exalted. If we do not reach that time, then our children and grandchildren will reach it, and they will sell your sons as slaves at the slave market,” said the article in Dabiq. “Every Muslim should get out of his house, find a crusader and kill him… And the Islamic State will remain until its banner flies over Rome.”

Tomorrow, Italian prime minister Matteo Renzi will address parliament with a plan to minimize the threat.

February 18, 2015
These Are the Most and Least Religious States in the Country
Next Post