College Students Today Are Less Religious Than Ever Before February 18, 2015 Hemant Mehta

College Students Today Are Less Religious Than Ever Before

This graph will put a smile on your face.

The numbers, from a study called “The American Freshman,” show that college freshmen are abandoning their faith labels in record number, with self-professed “Nones” comprising more than 27% of students, the highest percentage in 40 years. 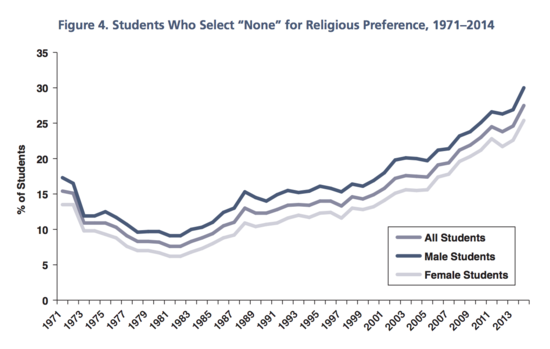 In 1971, 17.3% of men and 13.5% of women did not affiliate with any religion. By 2014, those figures had moved to 30% of men and 25.4% of women selecting “none” as their religious preference. These gender differences are consistent throughout the 40-year-plus history of the item.

Obviously, “None” is not synonymous with “atheist.” Many of these students believe in a Higher Power. Some may even believe in the divinity of Jesus, but they just don’t like organized religion and the connotations that come with words like “Christian” or “evangelical.”

That won’t stop me from feeling optimistic. I want this trend to continue because we’re better off living in a society where religion doesn’t have the influence it does now. A religion-free world won’t solve all of our problems, but it’s hard to instill values like critical thinking and reason in society when religious dogma overrides common sense.

February 18, 2015
This Finnish Band Just Released a Stunning Music Video Drawing Inspiration from the Work of Richard Dawkins
Next Post

February 18, 2015 The Catholic Church's Transphobia Has Never Been a Secret
Browse Our Archives
What Are Your Thoughts?leave a comment