Protestant Reformer, man who changed the world… and best selling toy? Martin Luther‘s life unquestionably changed the course of human history. His challenge of the Catholic Church’s power spawned a wave of new churches, religious conflicts, and even freedoms, the impact of which we still feel to this day.

Would we even be discussing atheism freely and publicly if Luther hadn’t struck that first blow against the central Church power? Maybe not. (Not that the promotion of atheism was the goal of a man who thought reason was “the Devil’s greatest whore” and despised Jews, Catholics, and pretty much everyone who didn’t share his way of thinking.) Luther’s greatest contribution to human history was inadvertent: in promoting his own brand of faith, Christianity splintered, allowing the eventual incursion of dreaded reason into the territory faith had long claimed.

Now, Luther is making waves in another unexpected fashion. 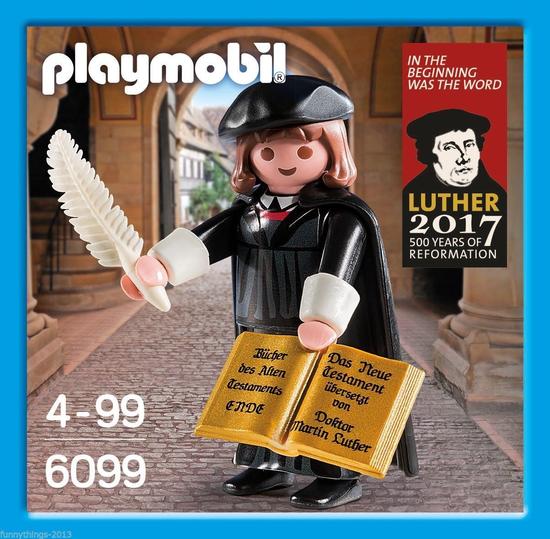 Astronomical sales of a tiny figurine of the Protestant Reformation figure Martin Luther, have confounded its maker, Playmobil, by becoming the fastest-selling Playmobil figure of all time.

The German toy manufacturer announced this week that the first edition of 34,000 pieces sold out in less than 72 hours, forcing the company to urgently request its factory in Malta to produce more of the so-called “little Luthers”. Fans have been warned that the next batch will not be available until the end of April.

As the success of this (rather adorable) toy suggests, it looks like the reformer’s run of unanticipated successes has not yet come to an end…

(Image via eBay. Thanks to Brian for the link)

February 17, 2015
If You're Going to Illegally Distribute Bibles to Fifth-Graders, You Probably Shouldn't Brag About It on Facebook
Next Post

February 17, 2015 A Religious Memorial Honoring a Middle School Teacher is Altered After Atheists Point Out Constitutional Problems
Browse Our Archives
What Are Your Thoughts?leave a comment