If You’re Going to Illegally Distribute Bibles to Fifth-Graders, You Probably Shouldn’t Brag About It on Facebook February 17, 2015 Hemant Mehta

If You’re Going to Illegally Distribute Bibles to Fifth-Graders, You Probably Shouldn’t Brag About It on Facebook

Here’s another idea: Don’t brag about how you handed out bibles to children in public elementary schools on Facebook. And then tell people one of the principals personally helped you do it.

Jamison Faught, son of Oklahoma State Rep. George Faught, did just that and now the Freedom From Religion Foundation is on it: 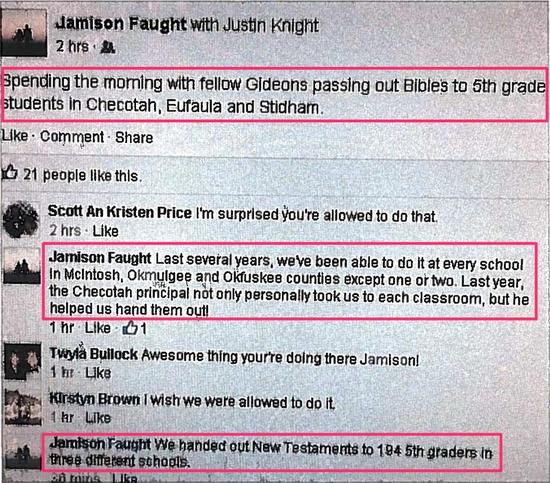 It is unfortunate that Jamison Faught and his fellow evangelizers view public schools as ripe territory for recruitment. Parents carefully instruct their children not to accept any gifts from strangers. The Gideon practice of distributing bibles to schoolchildren teaches them to ignore that guidance. Parents also understandably become nervous when adult men take an over-keen interest in handing materials to their young children without their knowledge or permission. It is also a usurpation of parental authority — parents have the right to direct the religion, or non-religious, upbringing of their children, not public schools.

This predatory conduct is inappropriate and should raise many red flags. In allowing Gideons to distribute bibles to elementary school students, the District is impermissibly endorsing religion by placing its “stamp of approval” on the religious messages in the bible and the Gideons’ discussion of the bible.

One of the problems, as FFRF notes, is that the Gideons specifically instruct members to get permission from the lowest rung on the ladder. They know they won’t get approval from superintendents (who are generally aware of the law), so they ask teachers or principals (who often don’t).

And they’ll keep doing it until people speak up and say something.