My friend Ben Corey, an Anabaptist blogger here at Patheos, has called out the ridiculous persecution complex of American Christians before.

Just ask yourselves, he pleads with Evangelicals and other Christian conservatives,

… what you’d say to those 21 Coptic Christians who were beheaded on the beach this weekend.

Corey is referring to the words-fail-me cruelty that ISIS perpetrated in its latest video: the brutal mass killing of Egyptian Christians who had reportedly migrated to look for work and fell into the hands of the Islamist death cult. The Allah worshipers sawed off their captives’ heads while the victims cried in vain to their God. Writes Corey,

I can hear the cries of “we know how you feel!” in my mind as I write this. 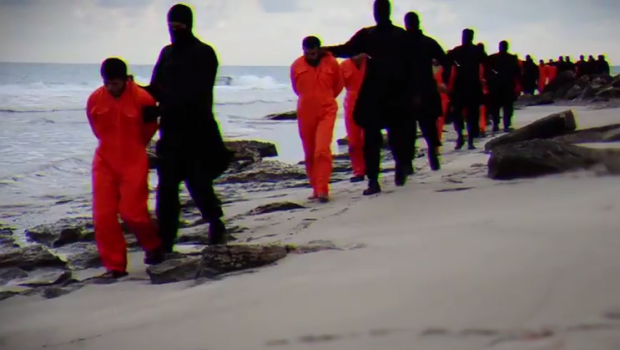 “We know how you feel beheaded Christians! Our bakery had to bake a cake that was used at a wedding for two women! You and I are one!”

“We know how you feel beheaded Christians! We lost our tax incentive to build a multi-million dollar replica of Noah’s ark because of discriminatory hiring practices. Don’t you feel sorry for us?”

“We know how you feel beheaded Christians! I lost my job because I handed out anti-gay literature at work.”…

With visuals in my mind of real Christians persecution, I no longer find anything about the American persecution complex remotely funny.

I agree that American Christians shouldn’t complain. However, your idea that we aren’t persecuted here is psychotic. Political correctness and tolerance embraces every group and personal creed except Christianity. Jesus is the only forbidden word. You can support blood-spattered Muslim murderers, trowel out pornography, dismantle the family and reinvent biology, but you aren’t allowed to talk about Jesus.

I honestly don’t what to say anymore to people like Abbott, who are so devoid of perspective, so ignorant of their own pervasive, American Christian privilege.

If you’d care to give it a try, you are most welcome, but I imagine it’ll be like talking to Jesus himself: You’ll yap yourself hoarse, and nothing will change.

Oh well. At least Mr. Abbott is real, in an are-you-for-real sort of way.