Do Atheists Need a Wake-Up Call After the Chapel Hill Shootings?

On February 10, Deah Shaddy Barakat, Yusor Mohammad, and Razan Mohammad (below) were gunned down by Craig Stephen Hicks; the three victims were Muslim, and their murderer was an atheist. When news of the shooting broke, the link between the shooter’s anti-theism and the victims’ faith was what seemed to dominate the narrative. While some emphasized the link between the shooting and atheism, some came straight out and said that New Atheists and New Atheism were to blame for the deaths. 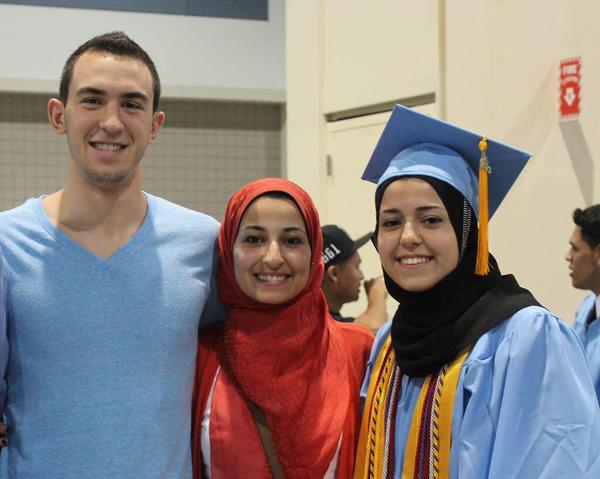 Since the initial reports, we’ve learned that the connection to atheism is far less certain than was initially reported, with police (at this point at least) having no evidence that this was actually a hate crime.

It’s a valuable point to make. Hicks had a history of run-ins with his neighbors (sometimes with a gun at his side), particularly with the victims; the parking dispute that police believe led to the shootings had been longstanding, and Hicks’ obsessive pursuit of the issue had gotten his towing requests blocked by the local tow company. Furthermore, it is (sadly) not unheard of for people to unleash lethal force over a parking spot — Hicks isn’t even the first to do so this year.

This isn’t to assert that Hicks was not critical of Islam, or that his antipathy towards religion played no role in the killings. We know he was an anti-theist, and his feelings on the subject may have influenced his decision to murder three people. It’s also worth noting that even if the crime was motivated in part (or entirely) by anti-religious feelings, it may be impossible to prove that those sentiments drove Hicks to pull the trigger. Why? Because he did not reference his lack of faith in relation to the crime. While the family believes it was the case, there is no evidence that faith played a role in Hicks’ ongoing dispute with the victims. Barring additional evidence, this doesn’t illustrate a hate crime — even if it was. A person’s motivation in committing a crime isn’t always apparent.

But even if it was a hate crime, should this, as the New Republic argues, be “a wake-up call for atheists“? Should the news that an atheist is capable of doing something monstrous, and capable of taking a fundamental disagreement over the question of God to a murderous conclusion, be a wake-up call to atheists?

But New Republic writer Elizabeth Stoker Breunig thinks otherwise. She writes that atheists need a wake-up call in many areas and this case should do it:

There is a distinction to be made between atheism in its pure sense, which describes anyone who does not believe in a god or gods, and New Atheism, the contemporary phenomenon of aggressive disbelief coupled with a persistent persecution narrative. Led by luminaries such as the late Christopher Hitchens and evolutionary biologist Richard Dawkins, New Atheism takes as its core creed a species of Enlightenment liberalism that exalts reason and free inquiry, without bothering to define reason or to explain what is worthy of inquiry, and why. For a school of thought that presents itself as intellectually robust, it is philosophically bankrupt and evidently blind to its similarities to the religions it derides.

Ignoring the “persecution narrative” jab, let’s get right to what she thinks are the intellectual shortcomings of New Atheism — the philosophical bankruptcy and blindness she sees. She suggests that these shortcomings are exemplified even in Richard Dawkins‘ tweet in condemnation of the Chapel Hill Shootings:

How could any decent person NOT condemn the vile murder of three young US Muslims in Chapel Hill? http://t.co/pdtwnKqYG3

Considering the format, it seems impossible that Richard Dawkins could have laid out the basis for his system of morality, even if this was the appropriate place to do it. But Stoker Bruenig believes this illustrates one of the deeper problems with New Atheism, as she’s defined it:

Dawkins takes the obviousness of his moral frame for granted; he doesn’t feel the need to offer an earnest denouncement of these murders because he does not honestly believe any person could view them as an outgrowth of a system decent people like him are a part of. But this is a persistent problem with the New Atheist movement: Because it is more critical of religion than introspective about its own moral commitments, it assumes there is broad agreement about what constitutes decency, common sense, and reason. Yet in doing so, New Atheism tends to simply baptize the opinions of young, educated white men as the obviously rational approach to complicated socio-political problems. Thus prejudice in its own ranks goes unnoticed.

This is just plain inaccurate. Atheists and Humanists devote a great deal of time and ink to discussing morality and the basis for a rational, compassionate worldview. Indeed, one of the presumably philosophically bankrupt New Atheists mentioned in the piece, Sam Harris, has devoted a book specifically to the topic.

Nor do New Atheist opinions go unchallenged. Richard Dawkins’ Twitter feed, since we’re on the topic, is certainly no stranger to such controversy, nor for that matter is Sam Harris’. Stoker Bruenig rightly notes that there is a high percentage of young, educated, white, male atheists; but she is wrong in suggesting that any one set of voices simply goes unchallenged in atheist circles. It’s further incorrect to imply that these people are a collective, putting forth or supporting a single set of ideas.

There are certainly points of disagreement and conflict within the atheist community, sometimes fueled by demographic and cultural blind spots, but that conflict is evidence that atheists do not simply baptize the opinions of select individuals or demographics and move on. Comments by prominent New Atheists are often the subject of intense debate — both in and out of those circles. Because there are no sacred texts or prophets in atheism, the prejudices and perceived prejudices of prominent atheists are quickly called out by other atheists — including the prejudices that Stoker Bruenig goes on to cite, regarding women, religious minorities, etc.

With this particular tweet, if Richard Dawkins is guilty of making assumptions (a “decent person” wouldn’t condone killing people over a parking spot, or for believing in a god), it is an assumption put into place by all of us, of all belief systems, who don’t kill each other over differences of opinion, and who do not advocate laws that would make it legal to do so. It is not, thankfully, a position unique to educated young men, but one that the majority of human beings practice in day to day life; it’s a shared moral framework, a position enshrined in secular law as well as many religious laws. Furthermore, it’s a point easily and immediately supported by the considerable debate about and discussion of morality within Humanist and atheist circles.

Which is to say, while Richard Dawkins admittedly did not attempt to lay out his philosophy on the value of life in 140 characters, it really doesn’t come out of a vacuum.

While criticizing New Atheism as being philosophically bankrupt, Stoker Bruenig makes a number of assumptions that are simply not true. In her opinion, New Atheism — the kind of atheism that doesn’t politely sit down and shut up but rather challenges the religious assumptions and privilege that atheists daily encounter — is just another type of religion. She writes that

… like any other religion, its [New Atheism’s] adherents can take its reasoning too far, and cross the line into violence. New Atheists like Dawkins will point out that nothing in New Atheism necessitates violence, and that many principles of the movement directly oppose it; they should be used to this kind of statement by now, as it’s precisely the argument they encounter and dismiss time and time again when it issues from religious faiths.

Perhaps this will be a moment of reflection for the New Atheist movement and its adherents. If nothing else, the takeaway should be that no form of reasoning, however obvious to a particular cohort, has a monopoly on righteousness. And no ideology, supernatural or not, has a monopoly on evil.

As I noted above, if any of this was in dispute — if New Atheism seriously proposed that lack of belief in a god claim was an immediate inoculation against bigotry, violence, and cruelty — this would be a point worth making. But it doesn’t.

Stoker Bruenig’s definition of New Atheism as just another religion is a source of many of the problems with her argument. New Atheism doesn’t have gods, or prophets, or holy men and creeds. New Atheism doesn’t and has never encouraged the killing of people who blaspheme — because there is no blasphemy without the sacred, to which New Atheism makes no claim. Atheism is a response to God claims. Secular humanism is a philosophy, not a set of sacred laws and obligations. If we want to term what is essentially just the vocal rejection of God belief and promotion of Secular humanism as New Atheism, that’s fine. But it is not and has never been a religion.

While there will always be people who respond in violent, reactionary ways to other ideas, this lack of sacred claims and holy figures is a crucial difference between religions and atheism: when an atheist confers a sacred status on positions or people in his philosophical community, he does so in addition to atheism; when a believer does so, he does it in accordance with his beliefs. Unlike religions that claim to be backed by the power of the Almighty, New Atheism not only doesn’t necessitate violence, it doesn’t claim the authority to be able to necessitate it.

The wake-up call that Stoker Bruenig thinks atheism needs is based on a lot of misconceptions about New Atheism. That’s not to say that New Atheists don’t make mistakes, or that there isn’t an argument to be made about how we discuss Islam, or any other topic. On the contrary, those discussions are and should be ongoing. Atheism has doubtless got room to grow, to be more inclusive, to figure out how to effectively frame our arguments, to ensure that our arguments don’t lend themselves toward exploitation by extremists, etc. But this isn’t a wake-up call, because atheism isn’t a religion, and it isn’t a movement that believes itself to be perfect: we are constantly debating our approach to everything from gender equality to cultural sensitivity. If Stoker Bruenig, or anyone else, thinks they’ve found some flaw with atheism that leads to such tragedies, I’m all ears. But so far, I’ve seen nothing but a lot of misconceptions and erroneous assertions about the nature of atheism and the New Atheist community.

February 16, 2015
Article Reveals How Far Leadership of Jehovah's Witnesses Will Go to Cover Up Child Sexual Abuse Within the Church
Next Post