Glad They Cleared Up That Mistake… February 15, 2015 Hemant Mehta

Glad They Cleared Up That Mistake…

Boyd W. Thomas wrote a letter to the editor of the Lexington Dispatch (North Carolina) that’s just gloriously weird. It begins like this:

God states that seven kings must come before the rise of the Antichrist. Revelations 17:10 says the seventh king will reign for a short amount of time. Is Barack Obama the seventh king?

I guess when the article ran, though, the headline said something like “Is Obama the Antichrist?” Which caused the editors to have to correct their mistake in an even more memorable way: 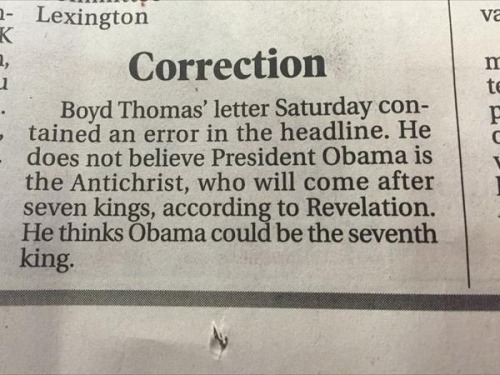 So the headline is now “accurate” on the website. Even though the letter itself, which is the real problem, will never see a correction.

February 15, 2015 It Can Be Rough to Worship at the Church of Apple
Browse Our Archives
What Are Your Thoughts?leave a comment