South Dakota Legislator: Evolution is “Racist, Counter-Scientific, Faith-Based and Blind to the Self-Evident”

A couple of weeks ago, I posted about a bill proposed by South Dakota legislators — Senate Bill 114 — that would allow Creationism and climate change-denial to make their way into public school classrooms.

… create an environment within all elementary and secondary schools that encourages students to explore scientific questions, learn about scientific evidence, develop critical thinking skills, and respond appropriately and respectfully to differences of opinion about scientific subjects taught in curriculum and coursework…

That all sounds well and good… until you get to this part:

In addition, neither the Board of Education, nor any local school board, or school administrator may prohibit any teacher from helping students understand, analyze, critique, or review in an objective manner the scientific strengths and scientific weaknesses of existing scientific theories covered in the courses…

Ah, yes. The “strengths and weaknesses” of theories like evolution, which are as solid as theories get in science.

The bill, which has a stated purpose to “encourage and protect the teaching of certain scientific information,” is sponsored by 10 senators and 12 representatives — all Republican, of course.

But it was a fix for a problem that never existed. Students could already “explore scientific questions” in class and teachers should always make a good faith attempt to provide answers. It’s not like that was ever in jeopardy. But this law made it possible to sneak Creationist and other anti-science ideas into public school classes under the guise of “teaching the controversy.”

I’m happy to say that bill is all-but-dead right now. More specifically, it got moved to the 41st day of a 40-day legislative session… which is a euphemistic way of saying “we’re not getting to this one.”

But here’s an added twist to the story.

Last Friday, members of the South Dakota Coalition of Reason went to the state capitol to speak with their representatives about several meaningful issues, including this one. 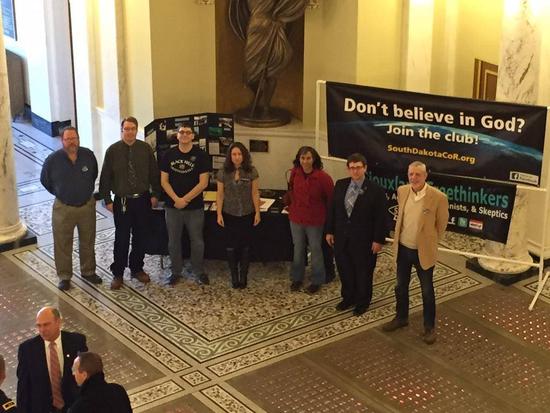 According to group member Eric Novotny, they had very respectful conversations with a handful of legislators — all Republicans — until they ran into Rep. Steve Hickey.

Hickey may be best known for crude comments he made last year about gay sex:

According to Novotny (slightly edited by me):

Hickey came down the stairs & poked around trying to get a rise out of the 10 people we had in the Capitol Rotunda. On what was probably his 4th attempt, he said that not only was Creationism science, but that evolution was racist. One of our members balked and said Hickey needed to get an education on what evolution actually is. This prompted Hickey to storm off & send the highway patrol down to visit us for a few seconds. All of this happened with a reporter from the Pierre Capitol Journal standing literally 5 feet away from Hickey.

The resulting article can be read here.

Hickey then went on Twitter to voice his frustration with the group… and science:

That’s, like, the essence of right-wing thinking on evolution, isn’t it?

… it’s foolishness, racist, counter-scientific, faith-based and blind to the self-evident.

It’s none of those things, actually, but Hickey isn’t exactly the sort of person who will listen to reason. He’s already made up his mind — wrongly — and he’ll legislate accordingly. All the worse for South Dakota’s students, who are fortunate (at least for now) that their science curriculum won’t be watered-down to include non-science and religious Creation theories.

At least not until next year, when Hickey or his allies will inevitably try again.

(Portions of this article were posted earlier. Top image via Shutterstock. Middle image via Eric Novotny)

February 12, 2015
The Impact of Charles Darwin: Creationist Edition
Next Post

February 12, 2015 It's a Miracle!
Browse Our Archives
What Are Your Thoughts?leave a comment