Gallup Poll: 22% of Americans Are Dissatisfied with Organized Religion and Wish It Had Less Influence February 12, 2015 Hemant Mehta

Gallup Poll: 22% of Americans Are Dissatisfied with Organized Religion and Wish It Had Less Influence

According to a new Gallup poll, nearly 40% of Americans are dissatisfied with the influence of organized religion: 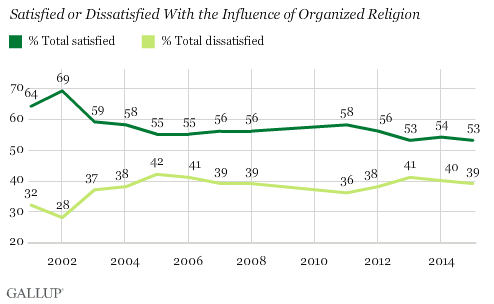 Thankfully, Gallup broke that down, too. Turns out 22% of Americans are unhappy with religion’s influence and wish there was less of it: 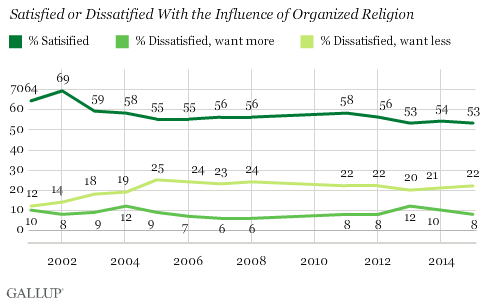 It is clear that Americans’ satisfaction with the role of organized religion in society is down from where it was a decade ago. There have been changes in other measures of religiosity over this time period — including most relevantly, a gradual increase in the percentage of Americans who say they have no formal religious identity. This suggests that the drop in satisfaction with the role of organized religion is at least to some degree, a manifestation of more general societal and cultural trends relating to religion.

Keep in mind: This all involves organized religion and not the spiritual-but-not-religious sort of faith that so many “Nones” tend to have. There’s plenty of reason to be unhappy with the actions of Christian megachurch leaders or the Catholic Church while still firmly believing in a Higher Power.

As much as I’d like to see those dissatisfaction numbers increasing, I’m surprised they’re as high and steady as they are. There’s plenty of reason to push back against what religious leaders have done and it’s clear that atheists aren’t the only ones who recognize that.