Atheist Politician, Among Others, Speaks Out Against Chapel Hill Murders During Press Conference February 12, 2015 Hemant Mehta

Atheist Politician, Among Others, Speaks Out Against Chapel Hill Murders During Press Conference

Yesterday, in response to the senseless killing of three innocent Muslims by an atheist, the Humanist Society of Greater Phoenix in Arizona held a press conference to express condolences for the victims and denounce the actions of someone who (even though his motivation is still unknown) was clearly a vocal atheist.

Among the speakers were atheist State Rep. Juan Mendez (below) and Johnny Martin, a Muslim leader of an interfaith group at Arizona State University: 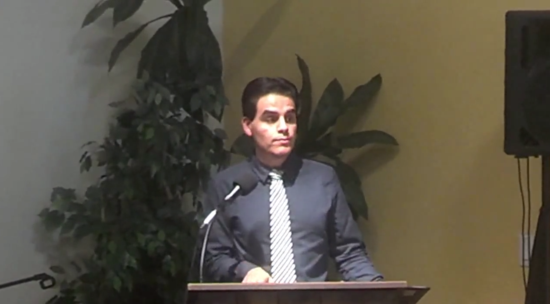 Mendez said in his remarks:

How could any decent person not condemn the vile murder of three young people?… There’s never an excuse for this ignorant kind of murder. As a humanist, we value all lives.

After attacks and atrocities committed by ISIS and other extremist groups, many of my atheist and humanist friends stood up for me, to defend my faith, and remind others that not all Muslims are violent people. I wish to remind my fellow Muslims, likewise, that this murder is in no way representative of the feelings or sentiments of the mainstream secular population.

Evan Clark, who’s on the board of the national Secular Student Alliance, also expressed grief:

… Your loss is our loss. And, as a member of the secular community, our heart goes out to the family and all those affected by the tragedy.

I know there are people out there who don’t want atheists doing this sort of thing — denouncing the crime as members of the broader atheist community — because it suggests that Craig Stephen Hicks‘ atheism played a role in this tragedy even though there’s no conclusive evidence of that yet.

Still, I think there’s power in speaking out early. Even if this wasn’t a religiously-motivated hate crime, Hicks was undoubtedly an atheist and there are people out there who will be quick to blame every one of us for his actions. I’d rather have it unequivocally stated that we, as atheists, disavow his crime and believe in the strength of our arguments. We don’t need to resort to violence. And anyone who goes to those lengths does so without the approval or endorsement of the most vocal critics of religion.

I don’t believe that anything about our non-belief — including the denunciation, by vocal atheists, of particular religious beliefs — could lead someone to think that shooting people of faith is the solution to anything. In more than a decade spent working with atheist organizations and writing about the community, I’ve only seen leaders stress the importance of our shared humanity even if they felt religious ideas were poisonous.

The more of us who stand in solidarity with the Muslim community at this time, the better, even if we have our differences of opinion.

February 12, 2015
Creationist Ken Ham Thinks #DarwinWasWrongDay Was a Hit... Even Though Everyone's Using It To Mock Him
Next Post

February 12, 2015 Nebraska Republican Says He'll Reverse Support of Anti-Discrimination Bill Because an Atheist Hurt His Feelings
Browse Our Archives
What Are Your Thoughts?leave a comment