Ramiro Olivarez is a truck driver who, like everyone else in his position, has to fill out a log containing his signature and the name of any co-drivers.

Even though he didn’t actually have a co-driver, that didn’t stop him from filling out those lines… with “Jesus”: 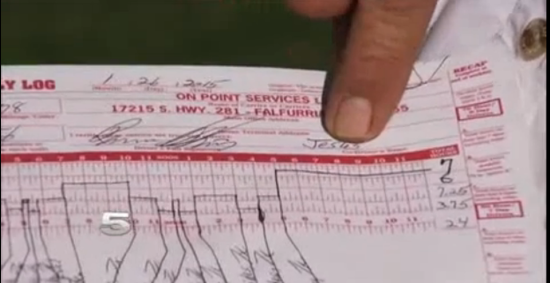 “The graph on there is strictly Ramiro Olivarez. And Jesus is my co-driver, and that’s my belief. That he’s with me,” he said.

Olivarez said this religious statement got him fired.

The letter of termination from his former Falfurrias employer states he was told to stop “submitting incomplete documentation and falsifying legal documents.” It also stated writing Jesus as a co-driver is a violation of federal and state law.

This isn’t religious persecution. This is a truck driver saying his imaginary friend was essentially capable of taking the wheel if needed. He lied on legal documents and that’s a problem for the company. Of course they fired him. I would expect to be fired, too, if I wrote down that the Flying Spaghetti Monster was on a business trip with me.

February 11, 2015
Gov. Scott Walker on Evolution: "That’s a Question a Politician Shouldn’t Be Involved In"
Next Post

February 12, 2015 Finally, An Honest Church Promotion
Browse Our Archives
What Are Your Thoughts?leave a comment