Three Muslim Students Were Killed in a Tragic Attack Carried Out by an Atheist February 11, 2015 Hemant Mehta

Last night, apparently in response to a dispute over parking spaces, 46-year-old Craig Stephen Hicks went to an apartment near the University of North Carolina at Chapel Hill and killed three Muslims — Deah Shaddy Barakat (23), his wife of just over a month Yusor Mohammad (21), and her sister Razan Mohammad Abu-Salha (19) — before turning himself in to the police.

Needless to say, whatever this fight was over, these students did absolutely nothing to deserve this fate.

As more information is coming out about Hicks, it seems obvious that he was an atheist. An anti-theist, to be more specific. His Facebook page is full of images and Likes that many of us have shared on social media.

What’s still unclear — and this is worth mentioning, even if people have already made up their minds — is whether this was an irreligiously-motivated hate-crime or “only” a dispute over parking that had nothing to do with the faith of the victims. (Not that it makes a difference to their families at this point.)

That said, what this monster did was despicable. Whatever their fight was over, I just can’t imagine what went through his head that he felt killing them was the way to resolve it.

And if their faith had anything to do with their fates, then I will gladly stand with the victims and their families. You can argue against Islam while still believing #MuslimLivesMatter — I don’t find that hypocritical at all. I’ve always condemned violence in the name of religion, but I would equally condemn it in this situation. Whatever Hicks believed about Islam, there’s nothing to justify what he did and I’m ashamed that someone who allegedly valued reason and logic used absolutely none of it in this situation.

No popular atheist I’ve ever read or written about has ever suggested violence is the solution for our disagreements about religion. Part of why many of us became atheists in the first place is because the evidence pointed in this direction. We know that logical arguments, not force, are enough to bring people to our side. For an atheist to use anything besides words to argue against faith (if that’s what happened here) is an indication that that person really didn’t understand what prominent atheists have been saying.

The Center For Inquiry released a statement condemning his actions:

“We hope that what ultimately emerges from this tragedy is a deeper understanding between people of all faiths and no faith that each one of us has the capacity to do good, to help in our own small ways to make the world a better place,” said Ronald A. Lindsay, president and CEO of the Center for Inquiry. “Despite our differences in beliefs, we are all part of the global human community, and we are all responsible for each other.”

Added Lindsay, “The alleged killer is reported to have promoted ‘atheism’ in some of his writings as a ‘solution’ to world crises, but there is absolutely nothing about the lack of belief in a god that supports the murder of innocent people, or doing any kind of harm to anyone. As secular humanists, we at CFI will continue to work toward fostering a free and enlightened world for everyone, no matter who they are or what they believe.”

“American Atheists condemns violence in any form, including violence against people of faith,” said American Atheists President David Silverman. “No person should be a victim of violence because of their religion. Anyone who would attack a person because of their religious beliefs, or lack thereof, attacks the very foundation of freedom. We must work to understand one another as people and recognize that our differences are an important part of our shared humanity.”

Richard Dawkins was disgusted by Hicks, too: 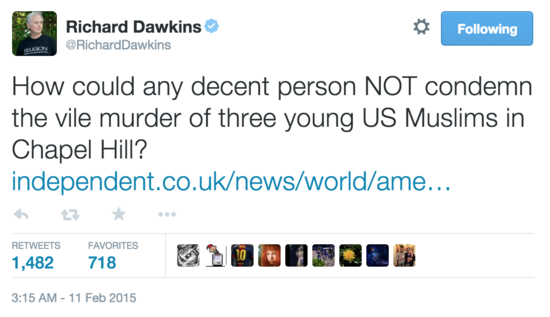 i know news outlets will start going through his social media and pointing at various statements about his atheism to “prove” that’s the reason he committed this awful crime. But there’s no reason to draw that conclusion yet.

In the meantime, please keep Deah and Yusor and Razan in your thoughts. You can read more about them here. It’s clear they were generous, kind individuals with so much potential in front of them.

***Update***: The Secular Student Alliance has weighed in at both a national and local level:

“We at the University of North Carolina Secular Student Alliance absolutely condemn these murders, and we stand in solidarity with the Muslim community,” says Samantha Jackson, UNC SSA Board Member. “It is hard to express the grief we feel as classmates, as Tar Heels, as members of the greater Chapel Hill community. Lives will never be the same, and we are trying to figure out how to move forward emotionally after this.”

“I am deeply saddened by the loss of my fellow students, and angered by this act of cruelty. It is unthinkable to me that lives can be taken so senselessly,” says Nick Freeman, Secular Student Alliance Board Member and North Carolina State University student. “Although I didn’t know them personally, it is clear that Deah, Yusor, and Razan cared about their community and had hearts for service and good works. My thoughts go out to their friends and families.”

The Secular Student Alliance promotes pluralism and secularism. We work alongside people of faith, and work to spread the understanding that both people with and without faith have the capacity to do good. Nothing about the lack of a belief in a god supports the murder of innocent people, and we absolutely condemn what has happened. We hope that dialogues can happen, and bridges are built, not burned, in the wake of this.

***Update 2***: The Freedom From Religion Foundation took a more defense stance while condemning the shootings:

FFRF can verify that Craig Hicks is not a member of FFRF, nor has he contacted us for information. He is not in our database. Anyone can “like” a group or person on Facebook. FFRF and all the groups and individuals named above have no control over that.

We are very sorry to see someone identified as nonreligious in the news for a violent crime. Such an action is almost unheard of in the freethought world. Mental instability is no respecter of persons, and happens in all walks of life.

FFRF has already taken press calls on this, and must point out that in a world roiled daily by violence in the name of religion, including commonplace personal tragedies as well as terrorism and theopolitical warfare, it would be almost unheard of for media to place religious leaders on the spot. When a crazed dad kills his children “to send them to heaven,” media don’t contact local or national denominational heads seeking a statement on their religion’s role in this violence. On the contrary, Pope Francis blamed the Charlie Hebdo victims of Islamist terrorism, saying such violence was the result of “making fun of the faith of others.”

No one should be targeted because of their religion or irreligion. We deplore all gun violence, which unfortunately occurs on a daily basis in the United States.

***Update 3***: The Secular Coalition for America shares in grieving for the victims:

The Secular Coalition strongly condemns this heinous act of violence. Committing an act of violence, regardless of the motivation, is unacceptable and inconsistent with secular and humanist values.

Secular Coalition interim executive director, Kelly Damerow, said nontheists are bound together as a community by a common lack of belief in a deity, but also by the humanist principles of doing good for goodness’ sake.

“We share many of the same moral convictions as our religious brethren — such as treating others kindly — and are outraged by this senseless act of violence,” Damerow said.

***Update 4***: The Triangle Freethought Society (based in North Carolina) added this note on Facebook:

We strongly condemn the actions of the individual who has claimed responsibility for this tragedy, Craig Stephen Hicks. No matter what someone’s religious belief — or lack thereof — actions such as these can never be justified.

Our organization denounces violence towards anyone, regardless of what beliefs are held by victim or perpetrator. We are deeply disturbed that this individual self-identifies as an atheist. We are not aware of any connections to local atheist groups in the Triangle area. Triangle Freethought Society President, Harry Shaughnessy, said “This is a terrible and pointless loss of life and our hearts go out to the friends and family of the victims.”

The American Humanist Association strongly condemns the fatal acts of violence committed against Deah Barakat, his wife Yusor Abu-Salha and her sister Razan Abu-Salha in Chapel Hill, North Carolina, on Tuesday. Our thoughts and deepest condolences are with the family and friends of the victims. No matter what the motivation was behind this horrific act, all violence must be condemned, and the person who has been charged with this crime, Craig Stephen Hicks, must be brought to justice.

Humanists respect the inherent dignity of all human beings, regardless of belief. The American Humanist Association will continue to work with our religious and non-religious friends and allies toward a more progressive world that accepts the freedom to believe and not believe.

February 11, 2015
Creationist Group: To Doubt the Existence of Unicorns in the Bible "is to Demean God's Word"
Next Post