I’ll just say this up front: I haven’t been able to verify this story. But on the hope that someone might be able to help Alecia if it’s true, I wanted to post it.

Alecia Faith Pennington grew up in a homeschooling Christian household. As you might expect, her parents don’t like government regulations. We know that freedom can be abused, but I’ve never seen it go this far. 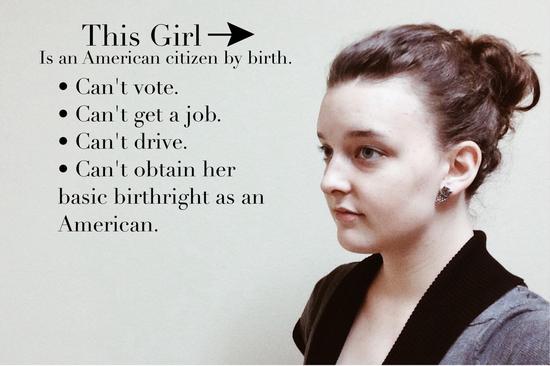 Alecia’s mother Lisa, who runs a website called The Pennington Point, never obtained a birth certificate for her daughter. (She was born at home.) Furthermore, there’s no social security number for Alecia… or school records (since she never attended public school).

In other words, there’s basically no form of identification for Alecia, who’s now 19. She’s about as off-the-grid as you can get. That means she can’t get a driver’s license, or apply for college, or get a job, or get on a plane, or vote, as she explains in the video below:

This isn’t her fault, as she says, but she has to deal with the consequences, and she’s asking for help from anyone who might know what she has to do to basically become a U.S. citizen with all the necessary paperwork. (Alecia has posted on Facebook a list of the steps she has taken so far.)

Her mother, meanwhile, said on Facebook that the video wasn’t true, without going into further detail:

She also gave a little more backstory on her website:

On Wednesday, September 24th my life was changed forever. My 18 year old daughter left home. She gave us no warning, no signs that it was coming. She didn’t try to talk to us about it or work with us. She, with the help of my parents, just left. And with her she took pieces of my heart that had been torn to shreds. I cried harder that day than I ever knew was possible. So hard that it scared my little boys and I had to go in my closet and put a pillow over my face to muffle the sobs.

We have spent the past 11 days trying to make head or tails out of what happened. Why did she leave? How can we help her? What will happen next?

We got no real answers. Only more confusion as some of the circumstances unfolded. We discovered that my parents had been planning this with her without telling us (as you can imagine, an additional part of my grief is not only the loss of my daughter but the total end of the relationship with my parents). We also learned that she has been telling exaggerated stories about what is going on inside our home to a godless woman who has been giving her foolish counsel and encouraging her to deceive us and get out.

The contempt for atheists aside, it just sounds like Alecia was trying to break free from a life spent in a bubble.

(I’ve seen some conspiracy theories online about how this is all happening because Alecia isn’t really her mother’s biological child, but there’s no evidence for any of that.)

Incidentally, I reached out to Lisa Pennington last night to verify the information in the video and which aspects of it weren’t true. As of this writing, she has not responded to me.

February 11, 2015
Their Reading Comprehension is Always Worse Than Mine
Next Post