Lawsuit Alleges That Georgia Teacher Told Child Not to Listen To His Mother Because She Doesn’t Believe in God February 10, 2015 Hemant Mehta

According to a damning new lawsuit from the Freedom From Religion Foundation, officials at Swainsboro Primary School (in Georgia) not only had children praying to the Christian God, they effectively punished the children of atheist parents by removing them from the classroom as these prayers occurred. 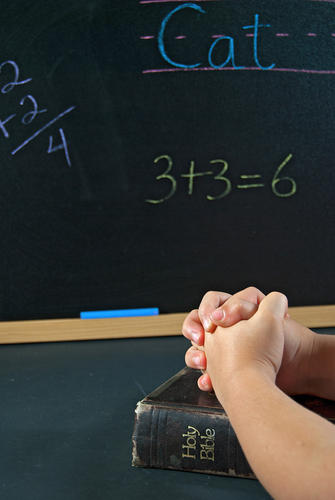 The plaintiffs are anonymous in the lawsuit but the children are going by the names “Jamie” and “Jesse”:

Before lunch, Jamie’s teacher, Cel Thompson, asked students to bow heads, fold hands and pray, leading the class in a call and response prayer: “God our Father, we give thanks, for our many blessings. Amen.”

When the parents first learned of the prayer practice in August 2014, they immediately contacted Principal Valorie Watkins to object. The teachers responded by telling the Doe children to leave their classrooms and sit in the hallway while the rest of their classes prayed. According to Jesse, the teacher “used her mean voice” when instructing Jesse to wait in the hallway.

After being told to go to the hallway during prayers, Jamie was teased by a fellow student, who thought Jamie was being punished for not praying. After this incident, Jamie began to regularly complain about feeling uncomfortable in class, and Jamie’s parents eventually had to pull their child out of school.

The lawsuit also adds that one of the teachers, Ms. Bright, told kids that Jesse had to sit in the hallway because the words “Under God” were in the Pledge, further ostracizing him from his classmates.

Even though the parents raised their concerns last fall (prior to the lawsuit) and were told everything would be taken care of, the prayers continued.

Actually, it got much worse:

On or about December 1, 2014, ECS employee Kim Hooks, Jesse’s science teacher, encouraged Jesse to “make a good decision” regarding prayer in the classroom.

On or about December 8, 2014, ECS employee Vanessa Wilkes, Jesse’s
physical education teacher, encouraged Jesse to begin praying with the rest of the students in Jesse’s class.

On or about December 3, 2014, Bright held Jesse back from recess to talk to Jesse about Bright’s personal conception of the Christian god. Bright spent almost the entire recess period explaining her personal views on Christianity’s god: that God loves Jesse and that God made the world.

Bright also told Jesse that Jesse should not listen to Jane Doe, Jesse’s mother, because Jane is a bad person for not believing in God.

These teachers, supported by their administrators, have absolutely no right to spread the gospel while on the clock. If the tables were turned and an atheist teacher said to a child from a Christian family that his parents were deluded, you can bet every Christian legal group in the country would be calling for that teacher’s head.

These parents tried to handle things on their own, but the district didn’t do enough to fix the situation. Hell, they didn’t do much of anything.

It’s hard to envision a scenario in which the district comes out on top here. Officials there have done everything they’re not supposed to do — and they don’t seem to give a damn about the fact that it’s the kids who have suffered the most because of their irresponsibility.

February 10, 2015
Progressive Mormon Excommunicated After Asking Tough Questions About the Faith and Its Leadership
Next Post