Fox News Host Claims Nobody Was Killed Recently in the Name of any Religion but Islam; the Facts Say Otherwise February 10, 2015 Rachel Ford

Fox News Host Claims Nobody Was Killed Recently in the Name of any Religion but Islam; the Facts Say Otherwise

I have great news, folks. Christians don’t kill people in the name of their religion. They don’t, and they haven’t. Maybe ever. Certainly not recently. Hindus are in the clear, too: there have been zero instances of Hindus killing people in the name of Hinduism. Likewise for Buddhists, and Jews, and, well, everyone. There have been zero instances of religious killings from practitioners of any religion… except Islam.

At least, that is, according to Fox News’ Eric Bolling, who shared this beautiful revelation on Saturday while discussing President Obama‘s comments at the National Prayer Breakfast. The particular comments that provoked this informative segment were Obama’s remarks about Christianity’s own history with violence:

And lest we get on our high horse and think this is unique to some other place, remember that during the Crusades and the Inquisition, people committed terrible deeds in the name of Christ. 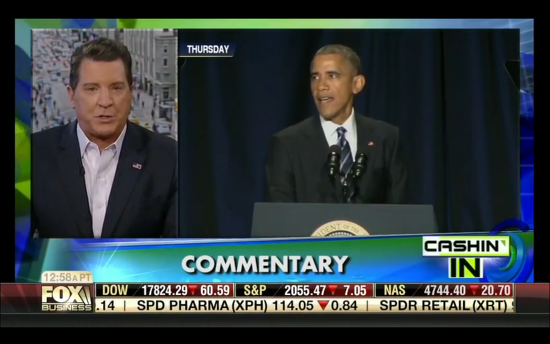 To Bolling, a reminder that violence and cruelty isn’t a problem unique to a specific religion was “practically blam[ing] Christians for” ISIS. How can pointing out that the problem of religious violence isn’t just a Muslim problem mean that it’s almost exclusively a Christian problem? Good question. But don’t wrack your brain too much on figuring that one out, because it only gets better from there.

Reports say radical Muslim jihadists killed thousands of people in the past few months alone. And yet when you take Christianity, Judaism, Hinduism, Buddhism, whatever, their combined killings in the name of religion — well, that number would be zero.

No matter how he spins it, Bolling is completely, absurdly wrong.

The Crusades and witch burnings provide a familiar, immediate image of Christian cruelty, but we needn’t look back so far. As Think Progress’ Jack Jenkins notes, plenty of evil has been committed very recently by self-professing Christians:

In 2011, Anders Behring Breivik, a self-professed Christian, launched a horrific assault in Oslo, Norway to defend “Christian Europe,” using an arsenal of weapons to kill 77 people — most of whom were teenagers. In November of last year, suspected Christian terrorist Larry McQuilliams mounted a full-scale attack on Austin, Texas, firing off more than 100 shots in the city before embarking on a botched attempt to burn down the Mexican Consulate. And in central Africa, the Lord’s Resistance Army (which, similar to ISIS, seeks to establish a theocratic state based on the Ten Commandments) forcibly recruits child soldiers, terrorizes local villages, and is thought to be responsible for the deaths of 100,000 people in Uganda and the displacement of 1.7 million in the greater region, according to the United Nations.

While Bolling might consider the facts to be “deeply offensive to Christians,” they are nonetheless facts. To suggest that zero acts of religious violence have been committed not just by Christianity, but by the combined religions of the world, save Islam, is ludicrous on a scale that seems revolutionary, even for Fox.

February 10, 2015
Assorted Gods and Prophets, Now In Chocolate, Get the Faithful Riled Up. (Oh, And Guess Which One Is Missing.)
Next Post