Christian Athletes Perform Acrobatic Dunk Show for Public School Students, but Did They Also “Share the Gospel” with Them? February 9, 2015 Hemant Mehta

Christian Athletes Perform Acrobatic Dunk Show for Public School Students, but Did They Also “Share the Gospel” with Them?

For some reason, Forest Elementary School (in Bedford County, Virginia) invited a group of college athletes to put on a basketball dunking show for the students.

The group was from Liberty University.

How do you think that played out? 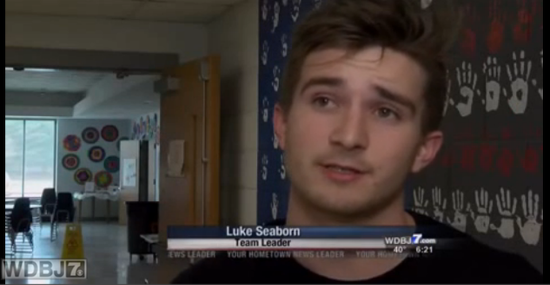 SOAR stands for “Sold Out and Ready” The group travels all over the country with a few basketballs and three trampolines.

The team usually performs acrobatic shows and shares a message about Christianity. Since Forest Elementary is a public school, the team encouraged students to “work hard and be humble,” according to school principal Karen Watson.

“We try to catch the attention of the crowd as we dunk basketballs and keep things exciting, but then afterwards every guy on the team has a chance to share the Gospel and share how God has effected his life,” explained team leader, Luke Seaborn.

There’s a huge discrepancy there. The article notes that, since Forest Elementary is a public school, the team told students to “work hard and be humble”… but the team leader says in the very next paragraph that every guy had the chance to share the Gospel.

I asked school representatives that question and Bedford County Public Schools Public Relations Coordinator Ryan Edwards told me (via email) that “there was no mention of Christianity at any time during the event.” He subsequently added that the WDBJ news reporter left the event before players spoke with the students.

Okay. So be it. Though that seems to be at odds with what’s stated on the dunking team’s website.

It’s also worth noting that the school principal (whose name is different on the school’s website than in the article) attended Liberty as an undergraduate. So it’s not like the group’s background was a mystery to her.

But here are a couple other questions to think about: Were parents aware that this was a Christian group performing for their children?

If The Satanic Temple put together a team to show off some soccer trick shots, would they be invited to the school?

Yesterday, I asked the SOAR Dunk Team if they even change their performances for public schools and leave out the religion stuff, but they have not yet replied back.

… we understand that public schools are a different scenario and we do things a bit differently because we are required to. When we do shows at public schools, the talk that we give at the end of our show is what we call a character/integrity or an anti-bullying speech. This is simply an encouragement to the students to work hard and maintain good character, or a talk on how bullying is damaging to students and something that needs to come to an end.

The talk that was given at Forest Elementary School was an encouragement to the students to work hard and stay humble, and the team member who gave the talk related this to his older brother who played college football and how he started as a walk-on and ended up becoming a captain of the team.

February 9, 2015
New Bill In Virginia Says Believers Who Apply For a Child-Care License Are Exempt From Fingerprinting Requirement
Next Post