A Fiery Sermon… in Honor of Charles Darwin

Out of context, this looks like a near-parody of a Sunday morning church service… for the religion of Darwinism. 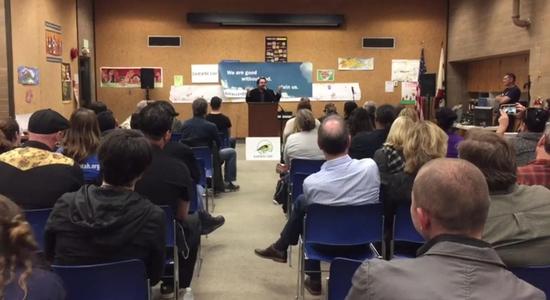 In context, it’s former pastor Jerry Dewitt having a little fun a few days ago in advance of Charles Darwin‘s birthday, honoring the beauty of science the same way he once used to speak of the glory of God. (The event was sponsored by the Stockton Area Atheists and Freethinkers and the Stanislaus Humanists.)

When you look into the night sky, and you seem to be mesmerized, as if there’s some unforeseen force that has brought your attention to the realm of the cosmic, that all of a sudden, unbeknownst to you as you was walking down the course of your life, making sure that you were dotting all the i’s and crossing all the t’s, unbeknownst to you, there was an event, there was a force, there was a motion that was pushing you, preparing you, and bringing you to a… stop at this one particular point, that would then force your attention skywards.

Can I get a Darwin?

But instead, I am here. What does it say that I should do? How does it speak to me in the depth of my soul? Is there a way that I should reach out and grab a hold of reality? Is there a way that I can grab ahold of my brother and draw them closer and closer and closer and say to them, “You are not just good with God. And you are not just good without God. But you have evolved to just simply be good. Stand here, my brother. Stand here, my sister. And gaze at the glory of reality with me.”

Can I get a Darwin?

Don’t read too much into it. It’s not “atheist preaching,” as the video title suggests. There’s no indoctrination, no threat of hellfire, no attempts at irreligious conversion. But it’s kind of entertaining to see Jerry get as genuinely worked up and emotional about science as many Christians do about Jesus.

February 9, 2015
Tonight's Episode of Vanity Fair Confidential is All About the Murdered Founder of American Atheists
Next Post