We Knew the Bible Didn’t Take Women Very Seriously… Now There Are Numbers to Back It Up February 7, 2015 Rachel Ford

You probably have a pretty good idea already, but if you ever find yourself wondering exactly how women’s ideas fared in the Bible, a recent project by an Episcopal priest, Reverend Lindsay Hardin Freeman and three other women in her church community, might give you an inkling. Freeman and her group pored through the text to find all the women in the Bible, and what they said. 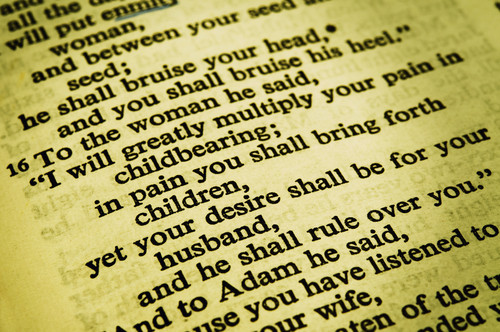 Their findings are really quite interesting. Among other things:

While this doesn’t mean that male speakers took up the remaining 98.9% of the text (the Bible contains everything from lineage records to Revelation’s prophesies), that’s still a tiny proportion of the overall text.

But it shouldn’t really be surprising, because it is just a symptom of the overall tenor of the Bible: it’s a patriarch’s world, and women who merit an in-depth mention are the minority, not the rule. Sometimes, even when a woman is key to the story, such as Jephthah’s daughter, whose words of encouragement to her father (to keep his promise to God, and offer her as a burnt sacrifice) are quoted, she is not named in the Bible: she is known through her relationship to her father, and that is all.

And in the case of Mary, who is praised in Christian theology as the most worthy and blessed of all women based on God’s choice to make her the mother of Jesus, it should be noted: God chose Mary. The Mother of God was informed after the decision was made. If Mary’s input wasn’t to be considered in the decision-making process for something this important, should we be surprised that it merited little space later on?