In 2010, Ireland adopted a new blasphemy law, rather than striking blasphemy off the books altogether. Now that controversial legislation will be tested for the first time, because the Muslims behind Ireland’s Islamic Cultural Center are insisting that locally-available copies of Charlie Hebdo constitute a violation of the law.

Ireland’s Islamic Cultural Center has said the presence of a depiction of the prophet Muhammad on the front page of the satirical publication, on sale now in Irish shops, is a clear breach of the country’s blasphemy legislation. …

Ahmed Hasain, the executive secretary of the Islamic Cultural Centre in Dublin, said: “In our view, the sale of this magazine is a breach in Irish law. It is blasphemous and it is illegal under the legislation. It’s against the law here in Ireland, that is quite clear.” 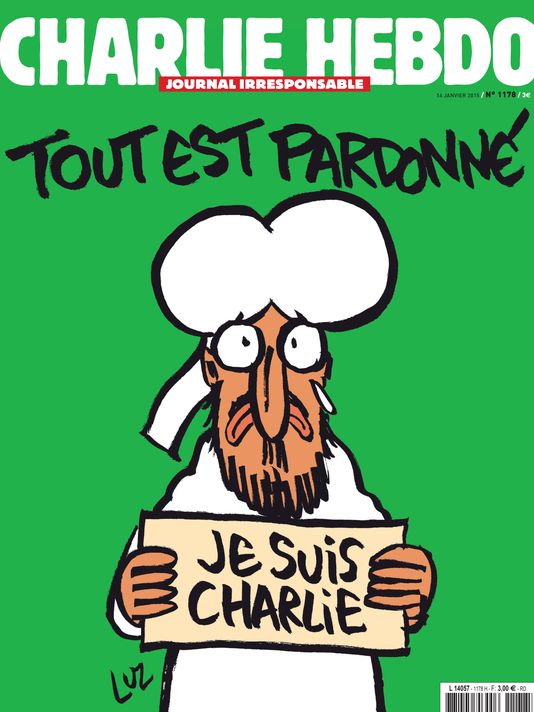 He described the law… as very helpful. “It’s good that the law is in place as it protects every faith,” he said.

Maybe. It just doesn’t protect the free-speech rights of the Charlie Hebdo staff, or those of anyone else uppity enough to mock religion in a way that believers don’t approve of.

Michael Nugent, writer and co-founder of Atheist Ireland, agreed with Hasain that technically speaking the sale of around 1,500 copies of the Charlie Hebdo edition in the state had breached the blasphemy law. He said: “The Charlie Hebdo cartoons seem to meet the first test of the Irish law, that is [that they are] ‘grossly abusive or insulting in relation to matters held sacred by any religion’. The next test in the law is ‘thereby causing outrage among a substantial number of the adherents of that religion.’ So if anyone wants to try to have a prosecution brought, [cases must be brought by the state ] what they would have to do is demonstrate that outrage has been caused. But it would be irresponsible to encourage or show outrage at a time like this. … That is a major flaw in the Irish law — it encourages outrage.”

By the way, the Irish Islamic Cultural Center that’s calling for prosecution was featured on this blog last month. One of its dignitaries, Ali Selim, is a lecturer at Trinity College who assures everyone that he loves free speech. Can’t get enough of it, really:

It’s an awfully stupid thing to say. The only reason the principle of freedom of speech exists is to protect speech that others may find offensive. By definition, inoffensive speech doesn’t need protection.

It might actually be good for this case to be prosecuted; it’s hard to think of anything else that will get more Irish citizens motivated to try to abolish the law that enables such a suit. I imagine that, in this sense, Nugent and his allies are pleased and stand to reap goodwill and publicity from whatever comes next. But they’re being proactive:

Atheist Ireland announced a new international campaign against blasphemy laws. The organization has joined forces with secular groups from Britain, Canada, Iceland, the U.S., and New Zealand. They are organizing an online global petition against laws which they say “legitimize mob violence, vigilantism, and persecution of minorities.”

You can express your support for the campaign and sign up for e-mail updates here.

February 7, 2015
A Canadian Commentator's Memorable Rant Against Anti-Vaxxers
Next Post