Once Again, President Obama Defends Right to “Practice No Faith at All” at National Prayer Breakfast February 5, 2015 Hemant Mehta

Once Again, President Obama Defends Right to “Practice No Faith at All” at National Prayer Breakfast

I wish it wasn’t such a given to see the President of the United States speak at an event called the National Prayer Breakfast, but he did it again today. President Obama honored religious leaders and spoke about the importance and goodness of faith… before adding all the obvious ways faith is used to do horrific things: 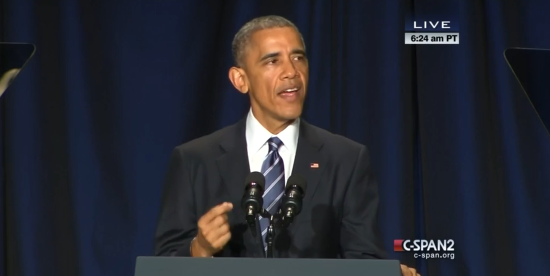 … We see faith driving us to do right.

But we also see faith being twisted and distorted, used as a wedge — or, worse, sometimes used as a weapon. From a school in Pakistan to the streets of Paris, we have seen violence and terror perpetrated by those who profess to stand up for faith, their faith, professed to stand up for Islam, but, in fact, are betraying it.

I don’t take issue with what he said there, but it’s mind-boggling to me that Obama doesn’t see his participation in a Prayer Breakfast as another example of faith distorted for political use.

He also didn’t see the hypocrisy in talking about church/state separation at an event promoting faith:

… the second thing we need is to uphold the distinction between our faith and our governments. Between church and between state. The United States is one of the most religious countries in the world — far more religious than most Western developed countries. And one of the reasons is that our founders wisely embraced the separation of church and state. Our government does not sponsor a religion, nor does it pressure anyone to practice a particular faith, or any faith at all. And the result is a culture where people of all backgrounds and beliefs can freely and proudly worship, without fear, or coercion — so that when you listen to Darrell talk about his faith journey you know it’s real. You know he’s not saying it because it helps him advance, or because somebody told him to. It’s from the heart.

The Founders wisely embraced church/state separation… and that’s why I’m at this event sponsored by a Christian organization.

That said, Obama gave another shout-out to people without religion, in addition to the passage above:

And so, as people of faith, we are summoned to push back against those who try to distort our religion — any religion — for their own nihilistic ends. And here at home and around the world, we will constantly reaffirm that fundamental freedom — freedom of religion — the right to practice our faith how we choose, to change our faith if we choose, to practice no faith at all if we choose, and to do so free of persecution and fear and discrimination.

We see governments engaging in discrimination and violence against the faithful. Sometimes religion is twisted in an attempt to justify hatred and persecution against other people just because of who they are, how they pray, or who they love… We believe in the inherent dignity of every human being, a dignity that no earthly power can take away. Central to that dignity is freedom of religion, the right of every person to practice their faith how they choose, to change their faith if they choose or to practice no faith at all, and to do this free of persecution and fear.

It’s worth pointing out that Obama mentioned by name a number of religious people who had done amazing things over the past year or who were persecuted for their faith — but did not mention Raif Badawi, who’s still awaiting 950 lashes for the “crime” of “insulting Islam.”

February 5, 2015
For the First Time Ever, a Darwin Day Resolution Has Been Introduced in the Senate
Next Post