On BBC TV, Christian Says Humanists Are Debauched and Their Weddings Are “Demonic,” Then Throws in… Pol Pot February 5, 2015 Terry Firma

On BBC TV, Christian Says Humanists Are Debauched and Their Weddings Are “Demonic,” Then Throws in… Pol Pot

U.K. Christian and founder of the group Discuss Jesus Taiwo Adewuyi is radically opposed to Humanists, he declared on BBC TV’s The Big Questions the other day, amid much audible snickering.

“Humanism is the cancer of thanks-giving. It is the devil’s PR. It is a first-class ticket to the sea of wantonness and debauchery. … The issue with Humanism is that it tries to knock God off the throne.” 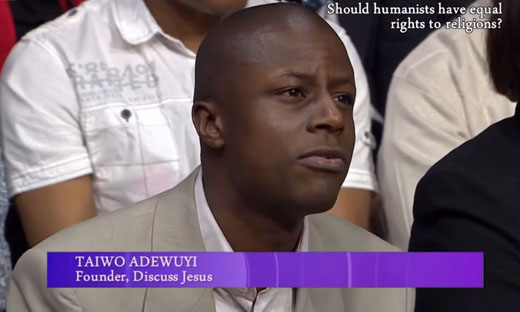 Adewuyi is disturbed that Humanist officiants have been asking the government for the right to perform marriages, a request that, while having wide popular support, has so far fallen on the prime minister’s deaf ears.

About that inequality, Andrew Copson of the British Humanist Association said in December,

“Under this government, Scientologists have been added to the list of religions that can perform legal marriages, joining Spiritualists, the Aetherius Society (which believes in aliens and that the Earth is a goddess), and dozens of other religions. To describe the legal recognition of humanist marriages as a ‘fringe’ issue insults the many couples — much larger in number than these many small religious groups — whose planned marriages next year will not be able to go ahead if [Prime Minister David Cameron] blocks this change.”

Copson was also at hand in the TV studio, and delivered a calm, to-the-point rebuttal to Adewuyi’s curious outburst.

“Instead of looking to revelation or authority, we look to reason and evidence to understand the universe. Instead of looking to moral rules that come from outside human beings, we look to other human beings to generate values in the here and now, and also to generate meaning in our life. …  I think that that is a very satisfying world view, a world view that has made a massive contribution to human progress and achievement. It’s [also] a world view that is held by a very large number of people in Britain… It is worthy of respect.”

But for people like Adewuyi, respect is something you demand instead of give. He even blurts out “Pol Pot!” (I never knew Pol Pot was a Humanist!) before the moderator cuts him off and switches to another Christian, the Anglican Reverend Rose Hudson-Wilkin, who is the official Chaplain of the House of Commons. (You can see that part of the broadcast here.) 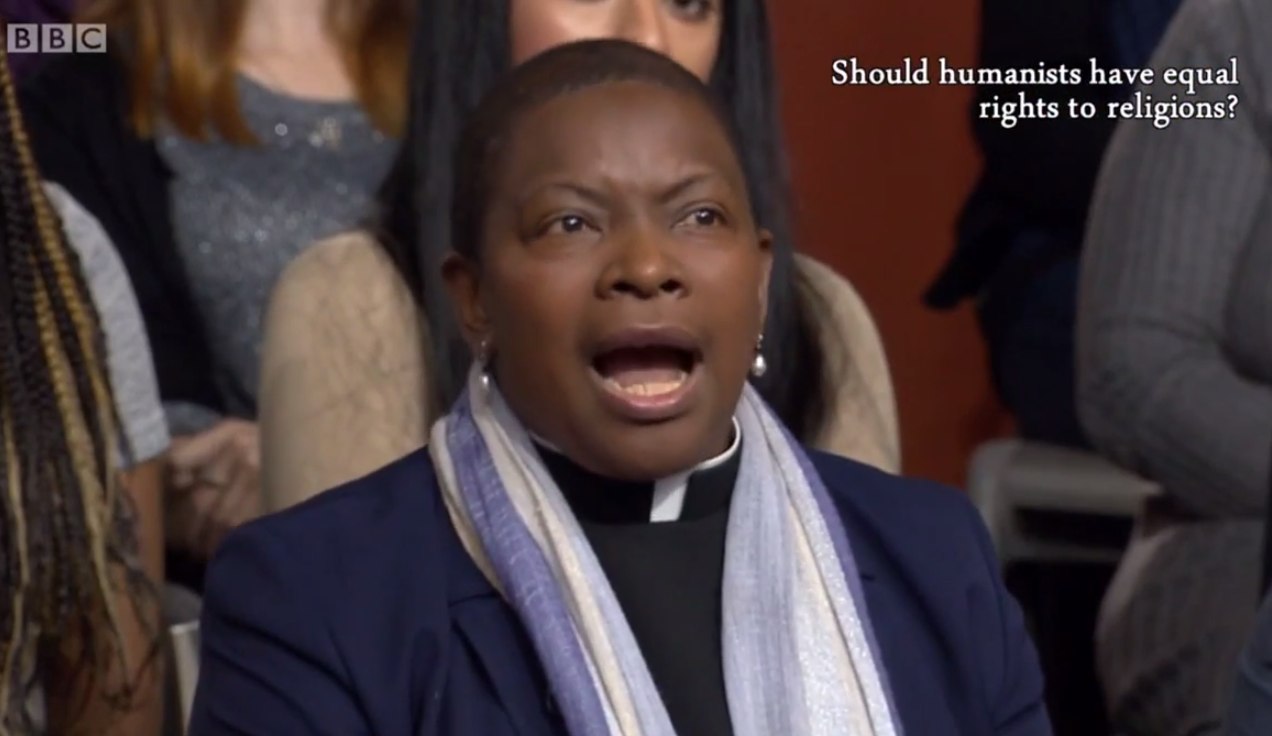 Hemming and hawing, the reverend isn’t sure if she’d even attend a Humanist wedding — because, she says, it’s outside her understanding of what a wedding is.

These representatives of Jesus, with their lack of arguments and their embarrassingly inarticulate ways, do unplanned damage to Christianity’s already-rickety credibility.

I guess I wish they were on TV more.

February 5, 2015
Atheist Billboard in Australia Reads: "Have You Escaped Religion? We Have!"
Next Post

February 5, 2015 Granddaughter of Trinity Broadcasting Network Founder Alleges Corruption Involving More Than $100,000,000
Browse Our Archives
What Are Your Thoughts?leave a comment