Atheist Billboard in Australia Reads: “Have You Escaped Religion? We Have!” February 5, 2015 Hemant Mehta

Atheist Billboard in Australia Reads: “Have You Escaped Religion? We Have!”

They know how to ruffle some feathers Down Under.

A new billboard in Sydney (Australia) put up by the Sydney Atheists and the Atheist Foundation of Australia holds little back in its portrayal of religion as something you may need to “escape” from: 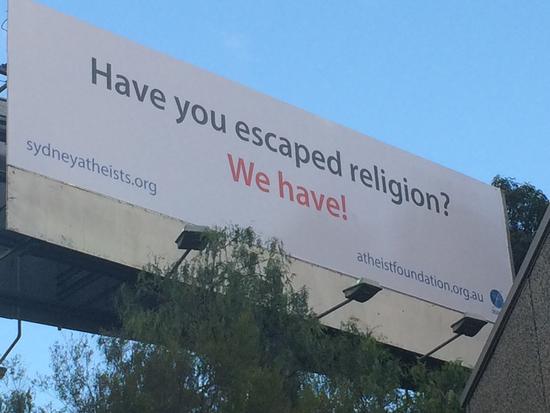 Most of the members of Sydney Atheists once belonged to a religion. With the benefit of a comprehensive and usually critical education, particularly in the areas of science, history, geography, philosophy and religion we have discovered the fallacies of religions. It is a great challenge for many to escape the religious indoctrination that most of us have suffered, usually from birth.

Sydney Atheists invite those who are trapped by religious belief to escape the bounds and strictures of their religions to gain freedom of thought, deed and a better life, governed by morals that are determined through rational, humane and sceptical thinking and the just laws of the land.

Sydney Atheists President Steve Marton tells me the reaction to the billboard has been overwhelmingly positive, especially on Facebook. Keep in mind, though, that the billboard just went up yesterday, so it’s too soon to tell if there will be any backlash.

February 5, 2015
It's Alive! Buddhists Insist That 19th-Century Mummified Monk Is Only Meditating
Next Post