Halal Meat Is All About “Compassion and Animal Welfare” — But This Secret Video Shows the Gruesome Reality February 4, 2015 Terry Firma

A year ago, Denmark banned halal and kosher slaughter. For meat to be considered kosher by Jews or halal by Muslims, the animal must be conscious when killed, which in theory goes against the law (slaughterhouses are required to electrically stun the animals first, to lessen mental and physical suffering). Most countries have granted exemptions for religious slaughter, however. Denmark decided it would revoke those.

The Danish move was condemned by many Jews and Muslims, who saw it as evidence of anti-Semitism and Islamophobia, rather than as a pro-animal-welfare measure.

Proponents of halal and kosher meat have long said that they care very much about animals, and that humane treatment is a top priority. Some easily put their religious differences aside over the issue. For instance, last March, Jonathan Arkush and Shuja Shafi penned a joint article for the Guardian, headlined “Jewish and Muslim Methods of Slaughter Prioritize Animal Welfare.” Arkush is the chairman of the defense division of the Board of Deputies of British Jews; Shafi is deputy secretary general of the Muslim Council of Britain. They wrote:

It is unfortunate that the BVA [British Veterinary Association] and other animal welfare organizations in the UK tend to view religious slaughter as incompatible with humaneness; quite the contrary is true — compassion and animal welfare stand at the center of the entire process. … [Our methods] quickly dispatch the animal by severing the structures at the front of the neck — the trachea, oesophagus, carotid arteries and jugular veins.

A swift, decisive precision cut with a sharpened blade across the throat is just as good as stunning — nay, better — the authors claimed:

Irreversible cessation of consciousness and insensibility to pain are achieved, providing the most effective stun.

In practice, it doesn’t necessarily work that way, to put it mildly. A video recorded surreptitiously in a supposedly halal U.K. slaughterhouse called Bowood, in Yorkshire, shows that workers make careless, repeated sawing motions across the terrified, uncomprehending animals’ throats (hold the ISIS comparisons) — a far cry from the single cut with a surgically sharp knife promised by halal-meat supporters. 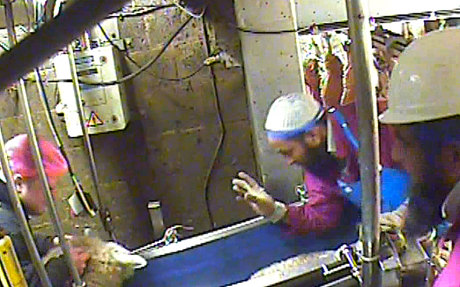 At 1:56, amid the ongoing carnage, slaughtermen can be seen clowning around and giving each other the middle finger; then one laughing worker gets in a sheep’s face, jeers at it, and mockingly slaps it across the nose and head before it is butchered.

Via the U.K. Telegraph:

Disturbing footage showing “routine abuse” of sheep in a halal slaughterhouse has reignited the debate over whether animals should be stunned before they are killed for meat. Under halal law, animals are supposed to be killed quickly by single cut from a surgically-sharp knife. Although 80 per cent of halal meat is stunned, the number of sheep killed without stunning is rising due to campaigning by Muslims, figures show. Secret filming in an halal abattoir in Yorkshire showed “horrifying” treatment of animals killed without stunning.

Workers were shown hacking and sawing at the animals’ throats with apparently blunt knives. In one instance the procedure, which according to Islamic law should be instantaneous, took five attempts. Halal rules also state that animals should never see the knife or witness others being killed, protecting them against unnecessary trauma. But the footage showed a man wearing a Muslim kufi skullcap at Bowood Lamb abattoir in Thirsk regularly sharpening knives in front of the sheep. Due to the design of the slaughterhouse, in which animals were forced on to conveyor belts, the sheep typically saw another member of the flock having its throat cut, bleeding on the floor and being hoisted and shackled. …

The film, captured by lobby group Animal Aid, which has used subterfuge to place cameras in 10 abattoirs since 2009, showed evidence of repeated malpractice.

Of course, the Bowood practices may be the exception to the rule. Awal Fuseini of the Halal Food Authority says they certainly go against his religion’s edicts.

“Any imam who looks at this video would be disturbed,” he said. “Every activity is a contravention of animal welfare standards — the operatives are poorly behaved and trained, the knives are not sterilized and do not appear sharp.”

The British Food Standards Agency has suspended the involved slaughtermen’s licenses; but to counteract further cruelty and abuse, Animal Aid, the group that secured the footage, is proposing that video cameras be trained on all killing floors, both in religious and non-religious slaughterhouses.

February 3, 2015
The Seven Words You Can Never Say in a Fundamentalist Christian School
Next Post

February 4, 2015 Ken Ham Has Sued Kentucky Officials Because He Doesn't Understand How the Law Works
Browse Our Archives
What Are Your Thoughts?leave a comment