On the “View from a Pew” show recently, Iowa Republican National Committee member Tamara Scott echoed the nasty (and completely off-base) conservative talking point that, when mandatory prayer in public school was deemed unconstitutional, it opened the door to all sorts of horrors: 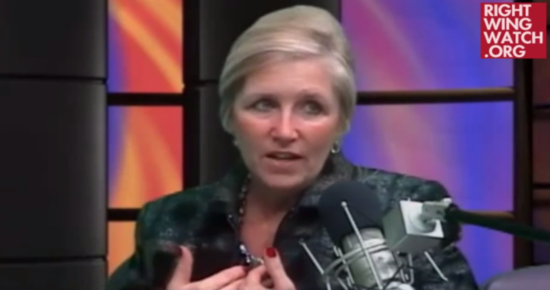 “When the prayer came out in the ‘70s, and that’s one of the things that I prayed for last week in Louisiana with 6,000 people, repentance, because we as a church should never have let that happen, we should never have allowed prayer to be taken out of our schools,” she said.

… “Since we’ve done that, David Barton has done studies and research that in your schools, the crimes used to be gum, tardiness and talking. Now it is assault, rape, murder. We’re dealing with much more difficult issues,” she said.

Talk about whitewashing the past… it’s not like public schools before that Supreme Court decision were havens of perfection. Hell, they were still segregated. But more importantly, there’s just no link between the removal of forced prayer and these modern problems.

Note Scott’s language, too. She talks about how prayer was taken out of the schools — which is a complete lie. Students are welcome to pray on their own. Teachers and administrators just can’t lead those prayers for the entire class.

In other words, prayer is still going on in public schools… and there are still school shootings.

If I were using #ChristianLogic, I’d blame the problems on Christians.

But that would make as much sense as blaming church/state separation for assault, rape, and murder.

February 3, 2015
Madison (Wisconsin) May Include Atheists as a Protected Class in Expanded Anti-Discrimination Bill
Next Post

February 3, 2015 Jesus Will Be Pissed If Christian Women Go See Fifty Shades of Grey
Browse Our Archives
What Are Your Thoughts?leave a comment