Mike Huckabee Says Marriage Equality Is Like Swearing and Drinking: His Friends Do It, but He Doesn’t Condone It February 3, 2015 Camille Beredjick

Mike Huckabee Says Marriage Equality Is Like Swearing and Drinking: His Friends Do It, but He Doesn’t Condone It

Potential presidential candidate Mike Huckabee has come up with a new way to describe his opposition to same-sex marriage: like swearing or drinking, it’s something his “friends” may partake in, but not something he’ll ever condone. 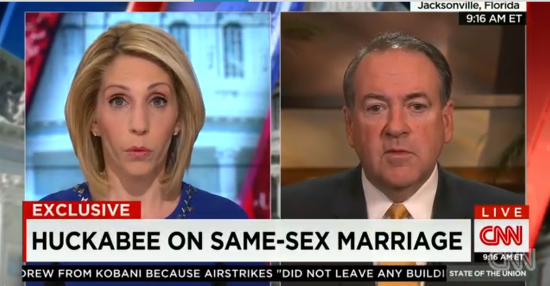 “People can be my friends who have lifestyles that are not necessarily my lifestyle. I don’t shut people out of my circle or out of my life because they have a different point of view,” Huckabee told CNN’s Dana Bash, while deflecting a question about whether he believes being gay is a choice.

“I don’t drink alcohol, but gosh — a lot of my friends, maybe most of them, do. You know, I don’t use profanity, but believe me, I’ve got a lot of friends who do. Some people really like classical music and ballet and opera — it’s not my cup of tea,” Huckabee said.

Can we get a fact-check on Mike Huckabee having gay friends? Twitter responded perfectly to this analysis:

Mike Huckabee is right. Being gay is like drinking and using profanity — it's something Jesus never said he was against.

“This is not just a political issue,” Huckabee said “It is a biblical issue. And as a biblical issue — unless I get a new version of the scriptures, it’s really not my place to say, ‘OK, I’m just going to evolve.'”

Asking a Christian to accept same-sex marriage, Huckabee said, is “like asking someone who’s Jewish to start serving bacon-wrapped shrimp in their deli.”

“We don’t want to do that — I mean, we’re not going to do that,” he said. “Or like asking a Muslim to serve up something that is offensive to him, or to have dogs in his backyard. We’re so sensitive to make sure we don’t offend certain religions, but then we act like Christians can’t have the convictions that they’ve had for 2,000 years.”

Fine. Everyone can believe what they want to believe. But those Jewish people you’re talking about don’t create laws that ban other people from serving bacon-wrapped shrimp in their delis. Your bigotry can govern how you live your life, but it won’t govern my rights.

February 3, 2015
Vaccines Have Become a Political Wedge Issue and There May Only Be One Solution
Next Post

February 3, 2015 Checkmate, Atheists: Minister Rebuts Viral Stephen Fry Video by "Proving" That Non-Believers Don't Exist
"Herbal syrup? Reminds me of how a South African health minister once prescribed beetroot to ..."
Akira625 COVID-Spreading Preacher: Joe Biden is Promoting ..."
"I feel you. Ted Cruz is one of my Senators ..."
Feminerd Hatemongering MP Derek Sloan Booted From ..."
"When God eventually shows up and does whatever he does then he will get my ..."
ImanIdram Christian Who Spread “Prophecies” About Trump’s ..."
"Given how this supposed god has been working lately, an image of Drumpf and the ..."
pparf Christian Who Spread “Prophecies” About Trump’s ..."
Browse Our Archives
What Are Your Thoughts?leave a comment