You and I are here at Friendly Atheist for one reason only: because we secretly believe in God.

Deep down, we all know we hate the Almighty (who is totally real) so much that we deny his existence by attacking him.

Well, Keith Thompson is on to us. After he saw the viral video of Stephen Fry responding to a TV interviewer who asks what the comedian would say to God if the two were to meet, Thompson, who runs Reformed Apologetics Ministries in Canada, is convinced that there are no atheists. To prove it beyond a shadow of a doubt, he’s come up with a little video of his own. 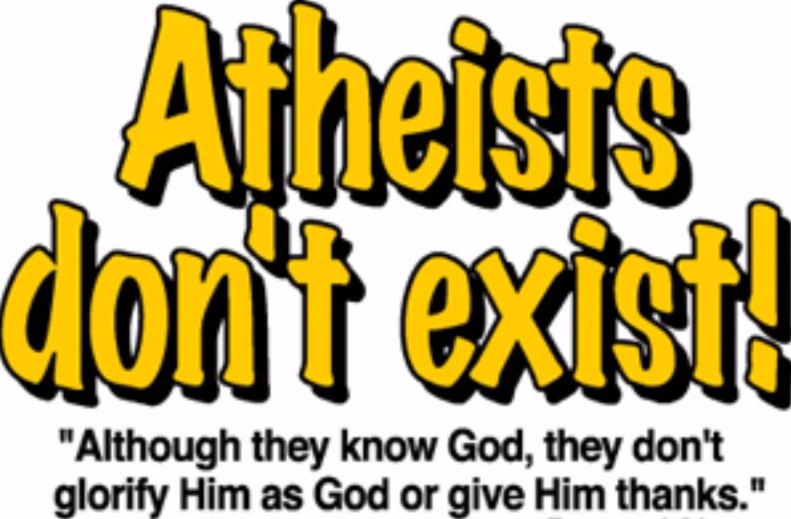 Here is a man who calls himself an atheist, and claims he does not believe God exists. Yet…he can’t help but rail against God with utter hatred, so much so that he shows that he believes God exists, and hates him!

A lesser man than Thompson would’ve said that Fry was just answering the interviewer’s hypothetical, but let’s admit it: the minister’s Spear of Heavenly Truth has pierced our Armor of Angry Denial. In other words, the jig is up, people.

While [Fry] speaks about moral issues such as suffering of children, he fails to recognize [that] in atheism, there is nothing wrong with that. All you have is some random, young, biological meatsack, who by chance appeared on this random planet called Earth, whose brain is interpreting sensations in a certain way, due to nerve pathways to the brain. Why is this wrong in atheism? You see, he’s assuming humans have value and dignity, that unnecessary pain is wrong, even though his worldview doesn’t justify this. Only Christianity does, by noting humans are created with value in God’s image, with dignity, and that unnecessary pain is wrong due to an objective moral standard.

The same objective moral standards that brought us child slave labor, forced symphysiotomies, an epidemic of child rape, a million attempts to marginalize and kill LGBT people, untold numbers of dead children due to faith healing, babies spanked with wooden dowels, even more dead children thanks to Bible-inspired physical discipline… I could go on. But I mustn’t, because obviously it’s all just evidence of how mad I am at God. I see that now.

So he borrows from the Christian worldview in order to attack it, because deep down he knows God, depends on him and can’t function in this world without doing so. …

Fry’s comments really serve as clear proof that people who claim to be unbelievers are in reality people with fallen natures, which caused them to hate their God — just as holy scripture says.

Man, he reads us like an open book. His video is easily the best analysis of the non-believer mindset since the last time a pastor told us what atheists really think.

P.S.: Russell Brand — hyper, incoherent, and spacey as usual — also has a bone to pick with Stephen Fry in this video challenge, boldy titled “Is There A God? YES!”

February 3, 2015
Mike Huckabee Says Marriage Equality Is Like Swearing and Drinking: His Friends Do It, but He Doesn't Condone It
Next Post