Saudi Arabia Just Proposed an Olympic Games For Men… and a Separate One For Women February 2, 2015 Terry Firma

Last October, after a Saudi woman had been spotted in the stands of a soccer stadium (to great consternation and ire in the Gulf kingdom), I wrote:

Luckily, Saudi bureaucrats are reportedly fighting for the right of women to be spectators at sporting events… cleverly employing segregation and gender apartheid. Local newspaper reports in Saudi Arabia suggest the government is considering building separate sections in stadia for female spectators.

Now there’s evidence that the country is making headway in keeping the ladies well separated from the men. Separated as in, across the border.

Saudi Arabia has proposed holding a gender-segregated Olympic Games. In comments made by Prince Fahad bin Jalawi al-Saud — a consultant to the Saudi Olympic Committee — it was suggested the country could bid jointly with Bahrain, which could host the women’s events. 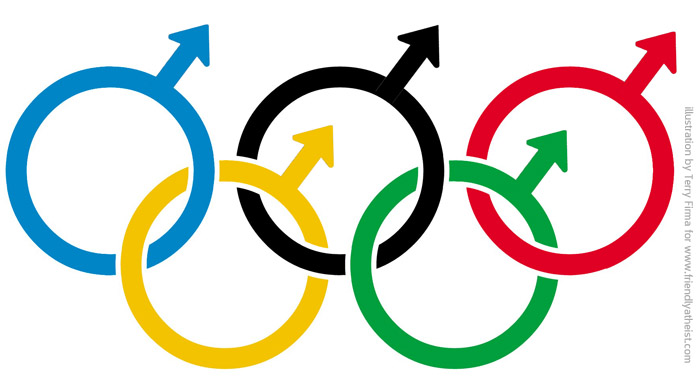 “Our society can be very conservative. It has a hard time accepting that women can compete in sports,” the Prince told French website Francs Jeux. “Wearing sports clothing in public is not really allowed. For these cultural reasons, it is difficult to bid for certain big international events.”

IOC President Thomas Bach released a statement explaining that Saudi Arabia would be denied the chance to bid, unless it complied with rules barring discrimination. “A commitment to ‘non-discrimination’ will be mandatory for all countries hoping to bid for the Olympics in the future,” Bach said. … “Countries like Saudi Arabia must really work to allow female athletes to freely participate.”

An IOC spokesman added: “You cannot simply ‘outsource’ certain issues to another territory“.

London 2012 was the first time that Saudi Arabia had sent female athletes to an Olympic Games, under pressure from the IOC. But the two women chosen — judoka Wojdan Shaherkani and and 800m runner Sarah Attar — were widely denounced as ‘prostitutes’ on social media by [Saudi] conservatives. They competed with their hair covered and were accompanied by male guardians.

Sport is not on the public school curriculum for girls.

To be fair, even sportsy Saudi men do not excel on the world stage. The country snagged one, and only one, (bronze) medal at the 2012 Summer Olympics, for equestrian team jumping.

I’m still expecting that the United States, a nation now accustomed to prostrating itself before the Saudis, will offer to host a future edition of the Olympics on American soil — segregated by gender, of course, to please its Middle-Eastern masters.

I can picture it now. While the men, dressed in dapper tracksuits, compete in back-flogging and limb-chopping in Dodger Stadium, the niqab-covered ladies get to show off their prowess in burqa-sewing and water-fetching on an unpaved lot behind Mo’s kebab shack in Ann Arbor, Michigan. It’ll be glorious.

General Martin Dempsey, make it so!

February 1, 2015
Neil deGrasse Tyson Explains the Science of the Super Bowl
Next Post