If This Georgia School Board Says Yes to Bible Distributions, Atheists and Satanists Will Be Ready to Join In February 2, 2015 Hemant Mehta

If This Georgia School Board Says Yes to Bible Distributions, Atheists and Satanists Will Be Ready to Join In

The Dougherty County School Board in Georgia may soon have to distribute coloring books from The Satanic Temple if they go through with a proposal to distribute bibles to students. The Gideons made a plea to the board this week to allow them to give away copies of the holy book: 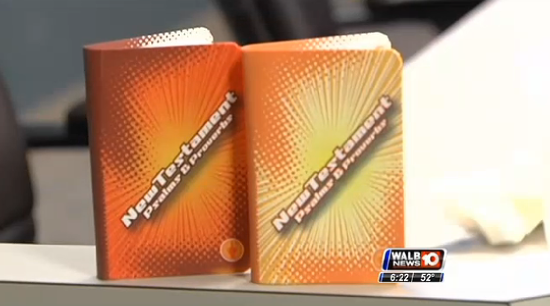 A Gideons representative spoke to Dougherty County school board members Wednesday encouraging them to allow their group to make bibles available to students.

“I think that everyone is for that idea. And man, would it just build character just to have our children to have that opportunity. In fact, it ought to be taught,” said DCSS Board member James Bush.

That’s a school board member saying the Bible ought to be taught in school, in case you were wondering if these were competent public officials.

There was only one voice of reason, though, and it was the board’s attorney:

School Board Attorney Tommy Coleman encouraged board members to follow the law, saying it would be unconstitutional.

“There have been specific cases about the distribution of bibles by the Gideon organization and they have almost unanimously been ruled to be unconstitutional, because it has the effect of the government sponsoring this distribution,” said Coleman.

Still, board members pushed the issue. “I petitioned Mr. Coleman to give us something in writing as to how this can be possible legally,” said Bush.

I’m not a lawyer, but I’ll give Bush the answer he wants.

The only way the Bible distribution would be allowed is if every other religious or non-religious group has access to the same limited forum. And I promise you that atheists and Satanists and a whole bunch of other non-Christians would gladly take advantage of the opportunity to get their materials in the hands of impressionable children.

So go ahead and say yes to the Bible giveaway.

Because it won’t be long before you have to say yes to this, too:

The Freedom From Religion Foundation has already let the Dougherty School Board know it will want to distribute pro-atheist materials if the Gideons are given a green light. Attorney Andrew Seidel adds that FFRF will invite The Satanic Temple to join them.

Incidentally, the Florida school board that already went through this whole process is considering an all-out ban on third-party distributions just so atheists and Satanists are shut out of the process.

February 2, 2015
Simon Singh Wrote a Perfectly Fine Article About Homeopathy, but an Indian Newspaper Rejected it
Next Post