Who Cares What Celebrity Atheists Have to Say?… Asks Columnist Who Has Nothing Interesting to Say February 1, 2015 Hemant Mehta

Who Cares What Celebrity Atheists Have to Say?… Asks Columnist Who Has Nothing Interesting to Say

In a piece that amounts to nothing more than frustration with popular atheists who offend religious sensibilities, Tim Stanley embarrasses himself in the Telegraph.

It starts by ripping on Richard Dawkins for a sarcastic tweet (which was later deleted) in which he suggested sending erotica to Islamic theocracies, perhaps to shake them up: 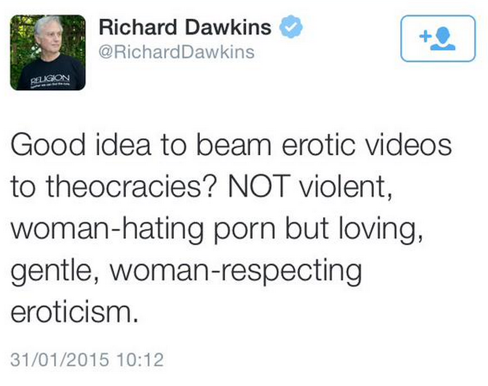 If we’re going down this road, I also hear that Islamists aren’t very keen on bacon, so perhaps we should bombard the Iranian countryside with pig carcasses? Also, miniature bottles of gin. And photos of hot guys making out — in a “men-respecting” and “gentle” sort of way.

After a few minutes of mockery, the tweet was deleted. Perhaps even he realised how utterly mad it was. Which suggests a degree of self-awareness that I didn’t think possible in Britain’s nuttiest professor.

But Stanley really gets angry at Stephen Fry‘s recent comments, in which he references a “capricious, mean-minded, stupid God.”

Ultimately, I don’t care that Fry doesn’t believe in God or that he spouts off about it at every given opportunity like a crazy man on a bus…

Fry didn’t “spout off” about it out of nowhere. He was literally asked a question about what he would say to God and responded accordingly.

That’s the sort of distortion Stanley relies on to make his point:

Celebrity atheism was a big thing ten years ago but now is old hat and rather tiresome. Oh, there are atheist thinkers out there whose opinions are worth hearing and there are eloquent people of faith ready to respond. But why must it always be the same old bores boring on about the subject? This yawnfest has to stop.

How’s that for being completely dismissive? These guys are “celebrities” and people enjoy listening to what they have to say… so why do they get so much attention?!

Maybe if Stanley read his own writing, he’d realize the answer to his question.

What’s frustrating is that newspapers keep giving space to people like him as if his opinions are well-thought-out. Believe it or not, there are far more people out there promoting faith-based nonsense than there are smart/funny opponents of it.

For once, though, you’ll enjoy reading the comments on that page. They seem almost entirely united against Stanley.

February 1, 2015
These Parents Oppose Vaccines for Reasons That Should Disturb Us All
Next Post

February 1, 2015 It's Been a Horrible Month for Libraries, Thanks Mostly to Widespread Book Burnings by the Islamic State
Browse Our Archives
What Are Your Thoughts?leave a comment