Members of the German parliament (Bundestag) just did something that we won’t soon see from the U.S. Congress: they put Raif Badawi‘s case on the parliamentary calendar and unanimously stood for his release. Badawi (pictured below, with his kids) is the Saudi blogger who was convicted of blasphemy and ordered to receive a ten-year jail term, plus one thousand lashes meted out in 20 weekly installments.

Tom Koenigs, a member of the Green Party, said the four-and-a-half-month flogging amounted to

… “murder on the installment plan.”

It’s not often that the Bundestag dedicates an entire debate to the human rights situation in a foreign country. But the flogging of the Saudi Arabian Bloggers Raif Badawihas triggered a wave of indignation in parliament, such that the opposition raised the issue on the agenda. The parliamentarians expressed concern and shock about the cruel torture imposed on Badawi, saying that the Internet activist — and his lawyer [human-rights attorney Waleed Abu al-Khair], who was also convicted — should be pardoned and released immediately. 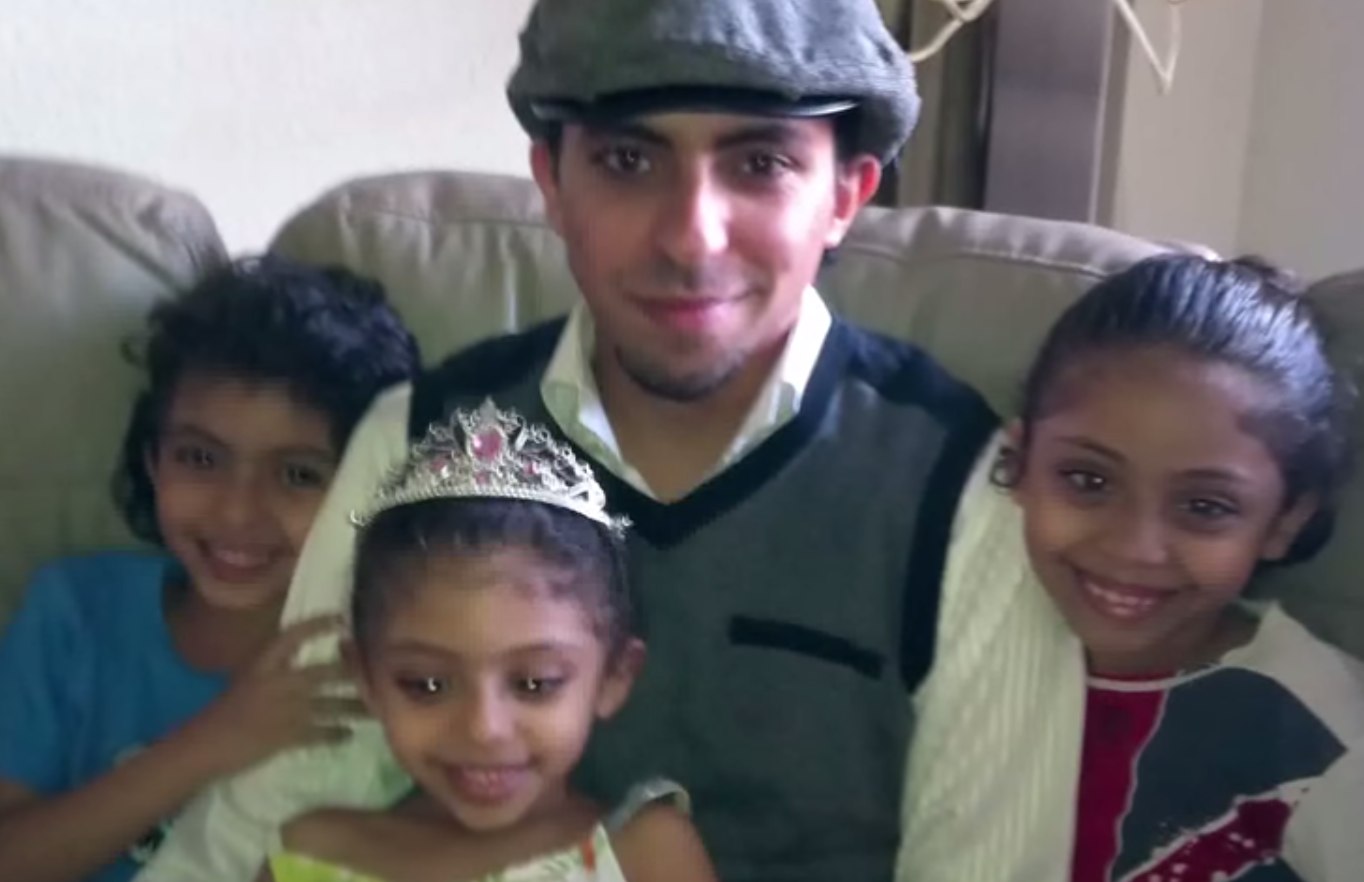 Members of the five parliamentary parties (CDU, SPD, CSU, the Left, and the Greens) were united on the issue — if not on what to do next.

“Saudi Arabia is, whether you like it or not, one of the major players in the region,” a spokesman for the Foreign Office declared this week.”Without Saudi Arabia we can’t do much, nor can much be done against Saudi Arabia.” Therefore, good contacts with Saudi Arabia are in Germany’s interest.

For the Greens and the Left, this goes too far: “Germany is courting the royal dictators,” Koenigs said of the regular trips by German government officials to the Gulf nation, a country whose human-rights record reflects “medieval circumstances.” They should instead visit the few democrats there, or tour the country’s prisons [added Koenigs].

The opposition parties — the Left and the Greens — also proposed that Germany stop training Saudi border officers, and that a moratorium be placed on arms exports to Saudi Arabia. German arms sales to the Gulf state were said to be worth more than $400 million dollars in 2013 alone.

The parliamentarians further criticized the “hypocrisy and double standard” of Saudi officials participating in the January 11 pro-speech march in Paris following the Charlie Hebdo massacre.

Deutsche Welle doesn’t mention whether anyone participating in the discussion agreed with German Chancellor Angela Merkel, whose office put out a statement of praise last week concerning the Saudi monarch King Abdullah, who had just passed away.

[Abdullah’s policies] “brought him and the Kingdom of Saudi Arabia respect and recognition. With wisdom, foresight and great personal dedication, he strove for a cautious modernization of his country and for dialogue between the Islamic world and the West.”

The Bundestag debate in Germany stands in sharp contrast to the near silence from the self-styled cradle of democracy that is the United States. A delegation headed by President Barack Obama and Secretary of State John Kerry flew to Riyadh a few days ago to pay respects to the dead king, with Obama telling the U.S. press that he would not raise Badawi’s case with the Saudis.

It’s true that a day before Badawi’s first of 20 floggings, the U.S. State Department expressed its concern over the sentence, which is something. On the other hand, earlier this week, the Chairman of the Joint Chiefs of Staff, Gen. Martin E. Dempsey, announced an essay contest intended as “a fitting tribute to the life and leadership of the Saudi Arabian monarch,” who Dempsey described as “a man of remarkable character and courage.” Not a word about Badawi, of course.

On this matter, I am ashamed for my adopted country, and I’d prefer to say, with a reference to the German seat of government, “Ich bin ein Berliner.”

Bonus link: Jon Stewart points out how just much U.S. leaders love to lick the Saudis’ boots. Skip to the three-minute mark.