Earlier tonight, the Carnival Corporation aired its first-ever Super Bowl commercial. It featured the voice of President John F. Kennedy talking about returning to the sea: 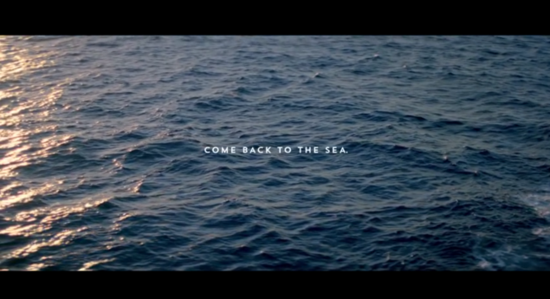 I really don’t know why it is that all of us are so committed to the sea, except I think it is because in addition to the fact that the sea changes and the light changes and ships change, it’s because we all came from the sea. And it is an interesting biological fact that all of us have, in our veins the exact same percentage of salt in our blood that exists in the ocean, and, therefore, we have salt in our blood, in our sweat, in our tears. We are tied to the ocean. And when we go back to the sea, whether it is to sail or to watch it we are going back from whence we came.

As far as commercials go, I have to say it was pretty effective. I’d never heard those words before, but they really resonate.

Unless you’re Creationist Ken Ham and you saw this as evolution propaganda. Somehow, in his world, a beautiful harkening to the sea is really a reminder that our lives are just meaningless:

Don’t you just feel this “personal connection?” After all, your ancestor came out of the sea and evolved by natural processes to produce you. Don’t you feel the connection? Don’t you just want to go on one of their cruises so you can stand on the deck of a big cruise ship, look at the sea, and contemplate your accidental beginnings — and perhaps worship the sea, because it gave birth to you!

Oh — and really, you can spend a lot of money on such a cruise, but because you evolved from the sea and are just an evolved animal, and when you die you won’t even know you existed — so you won’t even remember the cruise — so what’s the point anyway? You just evolved to have an ultimately meaningless existence!

Right, that’s what Kennedy was saying. It was about nihilism, not a boating contest.

We see a connection to the world around us… Ham sees only sin:

So — worship the stars and worship the sea! That’s the increasing state of our culture as it abandons the truth of God’s Word.

Except for the fact that it’s a spiritual issue because of our sin, it’s mind-boggling to think that intelligent people can actually believe life (and the whole universe) came about by accident! Ludicrous!

It is indeed mind-blowing… but it makes sense after you read up on it. Ken Ham should try it sometime. Turns out you can learn a lot when your library consists of more than just a single book.