A new survey released yesterday by the Pew Research Center in collaboration with the American Association for the Advancement of Science shows that there’s a huge disconnect between professional scientists and the general public.

You knew that, of course, but the numbers are striking in certain areas.

Like when it comes to scientific consensus on established theories like the Big Bang, evolution, and climate change. Check out what the general public says about whether scientists agree on these issues (which they do) or are divided on them: 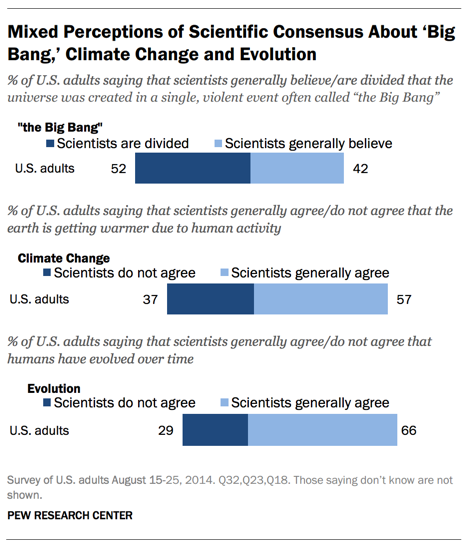 More than half of U.S. adults think scientists are divided over the Big Bang. And nearly a third of them think scientists disagree over evolution! This is just misinformation and ignorance. There may be disagreements over the details, but certainly not over the broad concepts.

Back to evolution, though. There’s actually a 33-point gap between the general public (which includes a lot of Creationists) and the scientific community (which takes Creationism as seriously as it deserves): 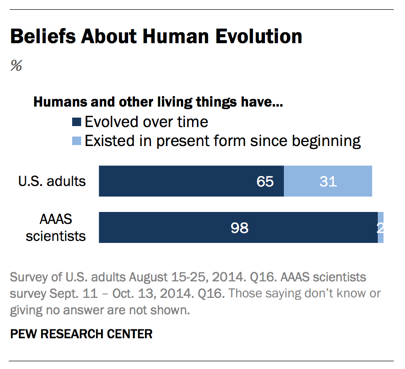 Roughly half of those who say that humans have evolved over time believe that evolution has occurred from natural processes such as natural selection (35% of all adults), while a somewhat smaller share (24% of all adults) believe a supreme being guided the evolution of humans and other living things.

The same sort of denial gap — 37% this time — exists with climate change and whether human activity plays a role in it: 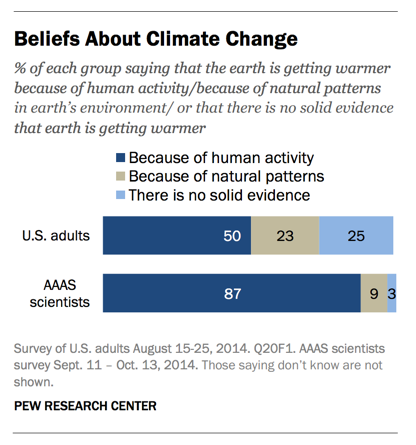 But none of that compared to the difference when it came to GMOs:

The biggest disconnect had to do with genetically modified foods, where there was a gap of 51 percentage points. Eighty-eight percent of the scientists said it’s safe to eat such foods, compared with 37 percent of the wider-ranging sample.

It’s disconcerting how much of a disconnect there is between the public perception of scientific ideas and what scientists actually say about them. Who deserves the blame for that? It’s hard to ignore the contributions of church leaders, science-denying politicians, and educators who don’t take these issues seriously. Science should be a universally-admired field, but it’s somehow become the subject of political football. All signs point to those gaps growing even wider.

January 30, 2015
Woman Who Vandalized Satanic Display in FL Capitol: Being Punished Would Be an Attack on My Faith
Next Post

January 30, 2015 Reverend Roy Harriger Guilty of Sexually Assaulting His Own Grandchildren... But Luckily, God Has Forgiven Him
Browse Our Archives
What Are Your Thoughts?leave a comment