Last year, atheist Dan Courtney delivered an invocation at the Greece (New York) Town Board meeting, making him the first atheist to do so at the focal point of the Greece v. Galloway Supreme Court ruling.

Remember: This is the town that had overwhelmingly Christian prayers (to Jesus Christ, no less, not a generic God) for several years before two residents stepped in and challenged them.

Even after that, the board only had a few token non-Christians give invocations before going right back to all Christians all the time.

That’s what led to a legal battle that went all the way to the Supreme Court, where a 5-4 majority ruled in favor of the town, setting the stage for government meetings everywhere to open with sectarian prayers at the speaker’s discretion.

The silver lining to the case was that atheists weren’t excluded from giving those invocations (and no city could reject them)… until Greece officials showed signs that they were heading right back in that unconstitutional direction.

A new policy that was later adopted by the town suggested that public invocations would be limited to religious residents only:

a) The Clerk to the Town Board (the “Clerk”) shall compile and maintain a database (the “Assemblies List”) of the assemblies with an established presence in the Town of Greece that regularly meet for the primary purpose of sharing a religious perspective (hereinafter referred to as a religious assembly).

So they would make a giant list of religious leaders and choose speakers from there. And if you weren’t part of a religious group in the area, it looked like you were out of luck.

Well, Linda Stephens, the atheist plaintiff in the Supreme Court case, tells me that the Town Board just released a list of all the groups invited to deliver an invocation in 2015 and two of them are non-theistic organizations: Sunday Assembly Rochester (which Stephens will deliver) & the Atheist Community of Rochester (which will be given by group leader Paul Grim). 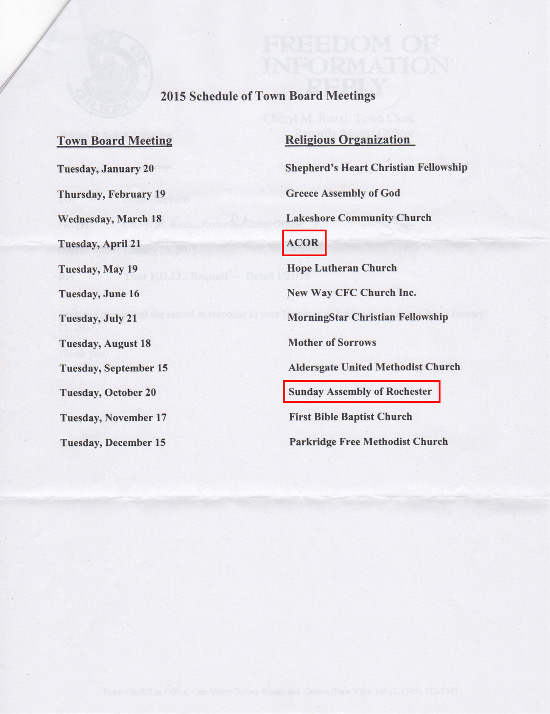 Stephens tells me (via email):

This Supreme Court case has proved to be a very good thing for atheists. It’s clear now that Town of Greece v Galloway is one of those ‘We lost the battle, but we won the war’ situations. Before the Court’s ruling last May, it was highly unusual for an atheist to be allowed to deliver an invocation at a government meeting. After the ruling, atheists and other secularists all over the country have begun delivering invocations, even in places like the deep South. I am pleased with what has happened and hope more and more non-theists will avail themselves of this opportunity. It’s a wonderful way to make the public realize that we are equal citizens.

I couldn’t agree more. It’s a sign that the legal plan to limit invocations to religious groups only has backfired on Christian conservatives. It also suggests that the policy in Greece is indeed inclusive of non-religious organizations, preventing another lawsuit in the future over this issue.

January 29, 2015
Snake Oil Alert: Why Gwyneth Paltrow Gets Her Vagina Steam-Cleaned, and Why You Probably Shouldn't
Next Post